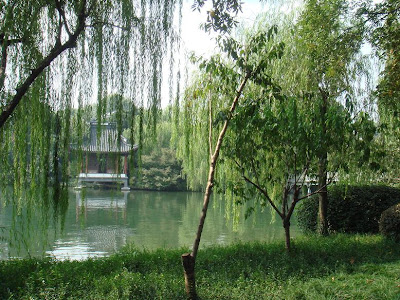 After the visit to Nanjing, we were heading to Hangzhou 杭州. It was supposed to be a 2 hour bus ride from Nanjing to Hangzhou. Let’s give a brief introduction of the city …

Hangzhou, the capital and the largest city of Zhejiang province, is at the south end of Beijing-Hangzhou Grand Canal. It is about 100 km southwest of Shanghai. The city of Hangzhou was founded during Qin Dynasty (221 BC – 206 BC) as Qiantang County 錢塘縣, more than 2000 years ago!

Hangzhou is famous for its beautiful natural scenery with the West Lake as the best-known attraction. Even the famous Italian traveller Marco Polo who came to China during Yuan Dynasty (1271 – 1368) described Hangzhou as the finest and the noblest city in the world. No wonder we always hear the Chinese saying: 上有天堂 下有蘇杭 (heaven above, Suzhou and Hangzhou below) to express Hangzhou is a paradise on earth. But our Nanjing local guide said when he asked the Chinese Malaysians “上有天堂”(heaven above), the reply was “下有地獄”(hell below). 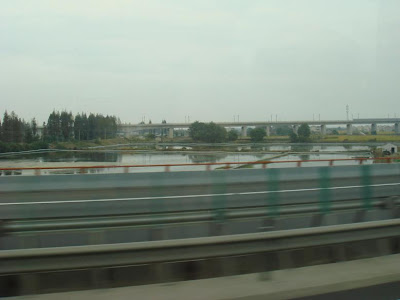 Here’s the photo taken when we were travelling on highway. There are lots of rice fields alongside, it is believed that rice was first domesticated in the region of Yangtze River valley in China.

The traffic was getting very bad after an hour on highway. It started to rain. Since all the vehicles were stuck there, two lanes became four lanes as many cars were trying to cut into the lines. Wow! The driving technique there is something we will not and never be able to learn! We thought there must be an accident, in fact it was a road construction that caused the terrible traffic jam. Not only the lanes were doubled, travel time was doubled too … 2 hour ride became 4 hour ride. So we were late for the show “Night of West Lake” which presented the culture of Hangzhou West Lake by five acts including the King Reviewing the Soldiers, Prosperity of Qiantang, Butterfly Lovers, Elegance of Qiantang and Oriental Buddhism. We missed the fist two acts though, but still everyone enjoyed it very much! 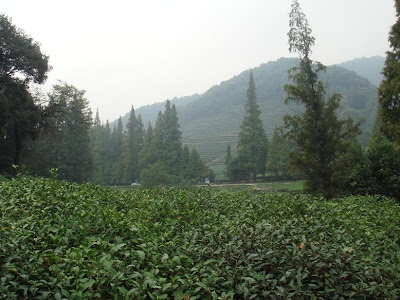 Next morning, we visited Meijiawu Village 梅家塢 where is the plantation of organic dragon well tea 龍井茶. West Lake Dragon Well Tea 西湖龍井茶 is considered the finest green tea in China, it is also ranked the first in top-ten Chinese teas for its four wonders - green colour, fragrant aroma, sweet taste and beautiful shape. There are many dragon well teas in the market, but the best and authentic ones should be from the mountains around West Lake such as Shifeng 獅峰 , Longjing 龍井 , Yunqi 雲棲, Hupao 虎跑 and Meijiawu 梅家塢 where the climate is mild with plentiful rainfall. Once again, it’s easy to memorize … 獅龍雲虎梅 (Lion Dragon Cloud Tiger Plum). Lion 獅峰 is ranked the first among them.

To be more specific, dragon well tea leaves are picked during different periods based on Chinese 24 solar terms. The best tea is picked before Qingming 清明 (Clear and Bright in early April), which is called Mingqian Tea 明前龍井. The tea leaves picked before Grain Rain 穀雨 in mid-April are fairly good and are called Yuqian Tea 雨前龍井.

Somehow I recall Hangzhou local guide said each house in this area has solar energy installation and I remember seeing houses with solar panels on the roofs. 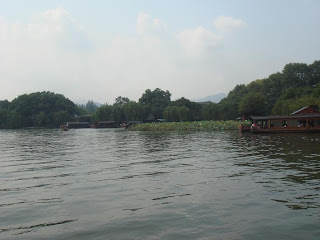 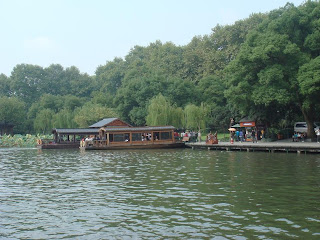 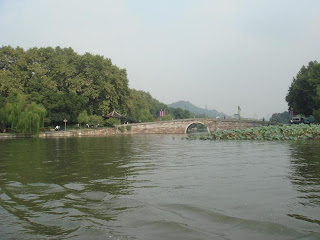 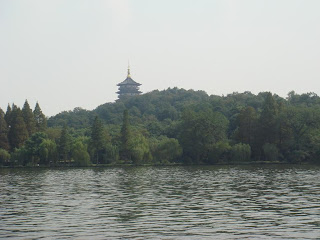 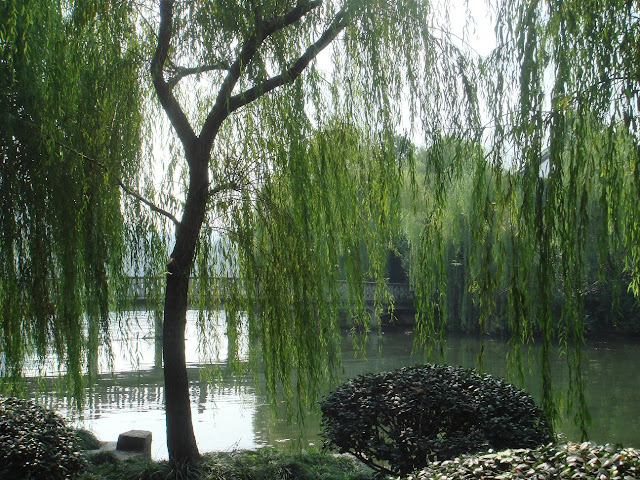 The most famous attraction in Hangzhou is West Lake 杭州西湖. In history, West Lake has influenced poets and painters for its natural beauty and it has been among the most important sources of inspiration for Chinese garden designers. It is also where many romantic stories and legends such as "The Butterfly Lovers" 梁山伯與祝英台, and “Legend of the White Snake" 白蛇傳 took place. West Lake Scenic Area covers 60 square kilometres of which West Lake itself occupies 5.6 square kilometres.

There are ten best-known scenic spots on the West Lake named as the "Ten Scenes of Xi Hu" 西湖十景:

Did you notice the long arched stone bridge in one of the above photos? It’s called “Broken Bridge” 斷橋, where Lady White Snake 白娘子 and scholar Xu Xian 許仙 met each other and fell in love according to the very famous Chinese folk story 白蛇傳 “Legend of the White Snake”.

The pagoda in another photo is Leifeng Pagoda 雷峰塔, a five story tall tower with eight sides located on Sunset Hill at the south of the West Lake. Originally constructed in Five Dynasties and Ten Kingdoms period (AD 975), it collapsed in 1924 and then was rebuilt in 2002. 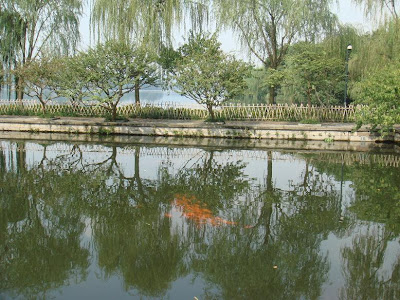 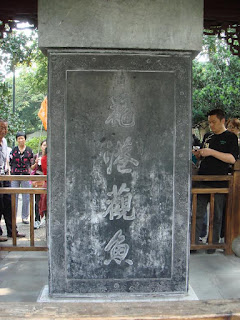 Fish Viewing at the Flower Pond 花港觀魚 is one of the top ten West Lake scenes. It was built between the hills and the West Lake 800 years ago in a private garden of an official in Song Dynasty. It's called the Flower Pond (or Flowery Pond) since a clear stream from Huajia Hill (Flowery Hill) 花家山 ran through here and down into the West Lake.

The bottom right photo is the sign “花港觀魚”written by Kangxi Emperor 康熙皇帝 in 1699. How come the bottom part of 魚 (fish) was written as three strokes of water radical (氵) not the four strokes of fire radical (灬)? Because the fish here is for viewing not for cooking as they only live in the water, not on the fire (never cooked).