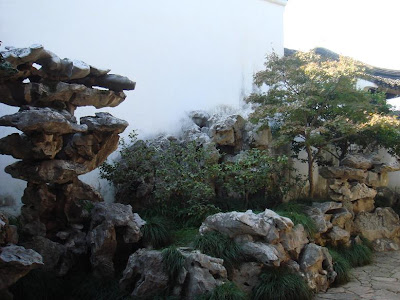 Suzhou 蘇州 located in southeast of Jiangsu province is considered “Paradise on the Earth” by the Chinese saying: 上有天堂 下有蘇杭 heaven above, Suzhou and Hangzhou below (which means in heaven there is paradise, on earth there are Suzhou and Hangzhou). Besides its natural beauty, there are many nice things in Suzhou. Regardless of the gender, everybody loves to visit Suzhou. Suzhou has many beautiful ladies (蘇州出美女) such as our beautiful and talented actresses 蕭芳芳 (Josephine Siao –the best actress at the 45th Berlin International Film Festival) and 夏夢 (Xia Meng). Actually I don’t know how Xia Meng looked like but I’m sure she’s very beautiful. When our tour guide asked “Is Xia Meng pretty?” I heard many voices from the old males 伯伯“Pretty! Pretty!” But all these pretty women are at least age 65 and nowadays the girls in Suzhou are different so guys may be a bit disappointed. On the other hand, unmarried women would be happy to travel to Suzhou. It's a place to find an ideal husband since men in Suzhou have to be 三從四得 (yup, you didn't read it wrong … traditionally women have to be 三從四得, it's the opposite in Suzhou). Basically Suzhou husband has to obey the wife, do the housework for the wife, be generous when wife spends money and be patient when wife is mad! One simple sentence to summarize the qualified husband in Suzhou “Wife is always Right”.

Another nice thing in Suzhou is the dialect 蘇州話. Suzhou dialect is considered one of the most elegant languages in China. Its tones are soft and gentle making the speech effeminate, so it’s pleasant and enjoyable to listen to Suzhou dialect. 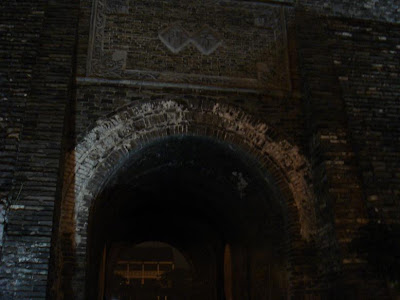 In the evening of second day tour, we travelled along Beijing-Hangzhou Grand Canal by a tour boat after dinner. Before we rode the boat, we walked through an old town wall (probably built in Song Dynasty?) and the local guide told us that the blocks of the wall had life-time warranty. Each block was engraved with the year it was made, the name of the block maker, and the name of the supervisor (or the name of the company – I forgot it’s the supervisor or company). Sounds to me that the construction was more reliable in ancient time. I wonder if they are still under warranty? 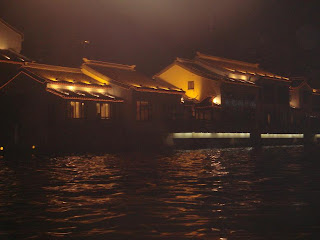 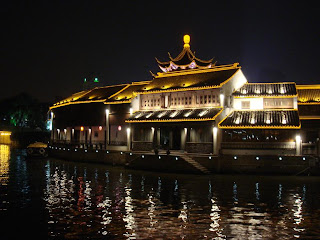 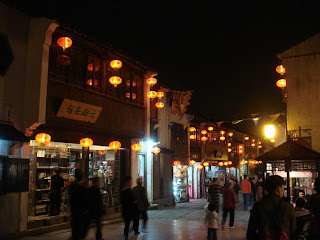 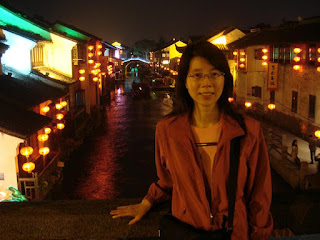 While we were on the tour boat travelling Beijing-Hangzhou Grand Canal 京杭大運河, a young Suzhou girl performed songs in Suzhou dialect with her 琵琶 (Pipa, a Chinese musical instrument). I looked outside the window when listening to the songs and saw several tour boats with young girls singing with Pipa. I guess many tours had the same entertainment at night in Suzhou. About 15 minutes after the boat reached Shantang Street. Shantang Street 山塘街 was built in Tang Dynasty around 825 AD along the river called Shantang 山塘 This river is linked to Beijing-Hangzhou Grand Canal at Changmen, where it has always been a busy business area. Since Tang Dynasty, Shantang Street has been a gathering place for merchants from all over China. In the first chapter of a famous Chinese novel "Dream of the Red Chamber" by Cao Xueqin 曹雪芹 described the street as "the best place for the wealthy and distinguished". Because Shantang Street has a long history of over 1100 years, it has been regarded as the first name of Suzhou ancient streets. 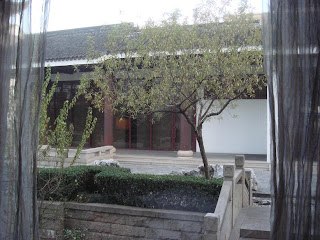 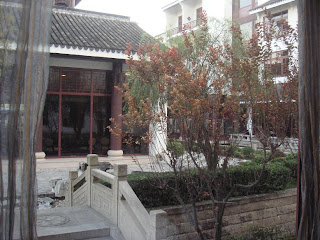 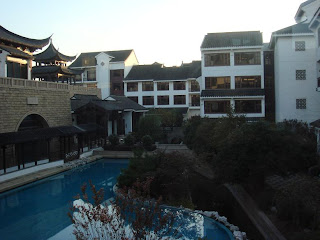 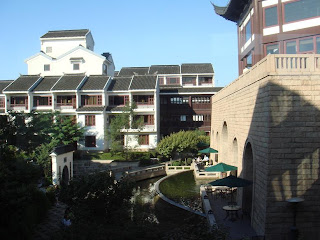 The hotel that we stayed in Suzhou was Pan Pacific which the tour guide claimed it's the best hotel among all the accommodations of our trip. I think the hotel is wonderful too since the guestrooms have a nice backyard view. Its architecture is like an ancient palace with a Chinese style garden in the centre. 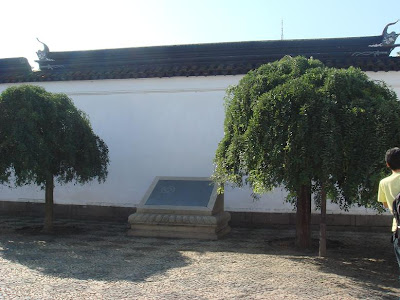 Next morning, we visited Master of the Nets Garden 網師園, a UNESCO World Heritage Site. The two trees in front of Master of Nets Garden are Pagoda Trees 槐樹. The Chinese idiom 指桑罵槐 中的「桑」指桑樹，「槐」指槐樹，明明是罵槐樹，卻指著桑樹來罵. In ancient time, only rich family could grow 槐樹 (Pagoda Trees). But sometimes the wealthy ones treated the poors quite badly and it was illegal to point or scold at 槐樹. So people pointed to and scolded at 桑樹 (Mulberry Tree) to express their anger. Later it became a Chinese idiom - pointing to Mulberry but scolding at Pagoda tree. 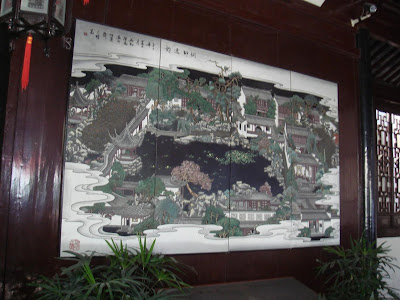 Suzhou is considered one of the most beautiful cities in China because this place is famous for its classical gardens as we always hear "江南園林甲天下，蘇州園林甲江南" (Jiangnan gardens are the best in China, Suzhou gardens are the best in Jiangnan). Currently Suzhou has more than 200 gardens, some of the finest and representative ones are Great Wave Pavilion 滄浪亭, Humble Administrator's Garden 拙政園, Lingering Garden 留園, Lion Grove Garden 獅子林, Master of Nets Garden 網師園, Retreat & Reflection Garden 退思園. Now let’s go inside to Master of Nets Garden. 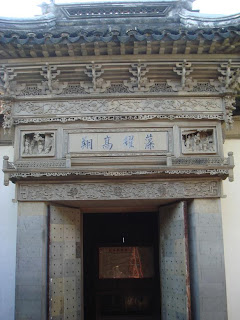 Wow, this gateway is very delicate with the exquisite carving! I really love the tiny carved figures. 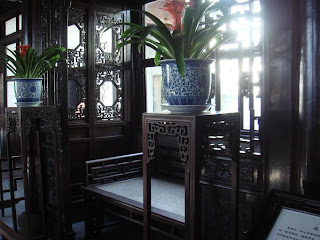 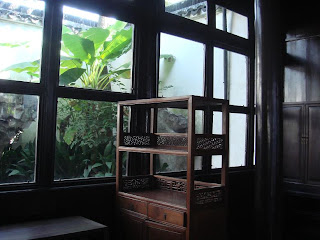 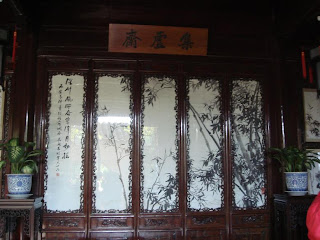 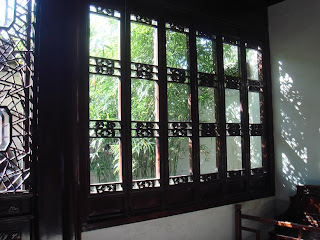 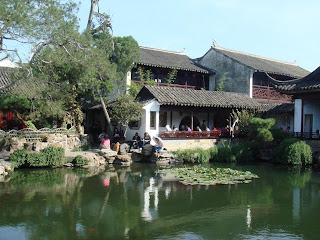 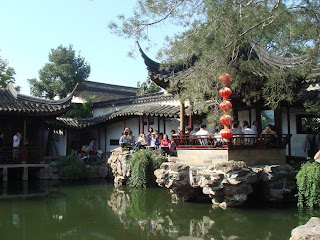 Suzhou classical gardens were full of romantic ambience 詩情畫意 in ancient time. We can find it in Master of Nets Garden, for example the library (or the reading room) was very pleasant and romantic during the rainy days as the rain drops on the roofs created water curtains and the rain drops on musa basjoo (banana) leaves 芭蕉葉 by the window created nice sounds. In the meditation room, the combination of bamboos drawing and real bamboo trees outside the window creates harmonized scenery. The most popular spot of the garden is its pond with the pavilion where we saw many students drawing or sketching different views of the garden. Can you guess when the garden was first constructed? It was in 1140 during Song Dynasty, more than 800 years already! 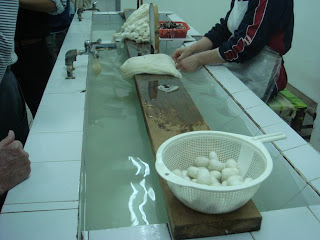 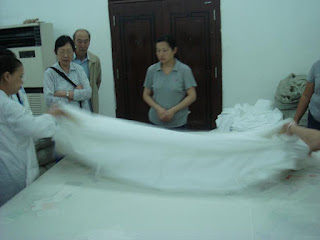 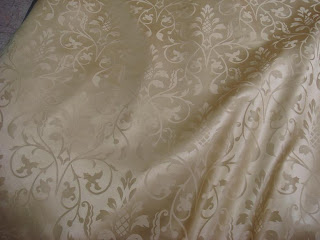 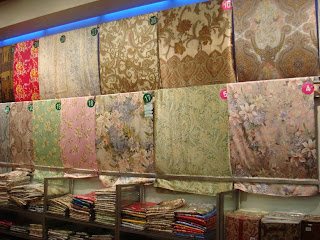 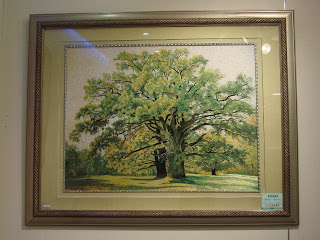 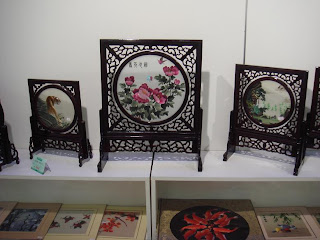 Silk was originated in China more than 3000 years ago and it became very popular in the world. I’m sure everyone has heard of the Silk Road which was begun sometime in Han Dynasty (206 BCE – 220 CE) with the export of silk from China to Central Asia (today’s Shinjang 新疆), India, Persia (today’s Iran) and Arabia (today’s Middle East). The route was then expanded to North West Africa and Europe. Within China, Suzhou is the most famous in silk production. We visited a silk factory there to watch the expansion of cocoons. There were many products made from silk including luxurious quilts, beautiful scarves, face and hand creams, silk embroideries. One interesting fact according to our local guide: because the production of silk is very important in Suzhou, industrialization there is prohibited (I think is more likely minimized) since this will affect the quality of mulberry leaves which silkworms 桑蠶 are fed on as mulberry trees are very sensitive to the environment.