Trip to China (Part 7) – the largest city in China, Shanghai 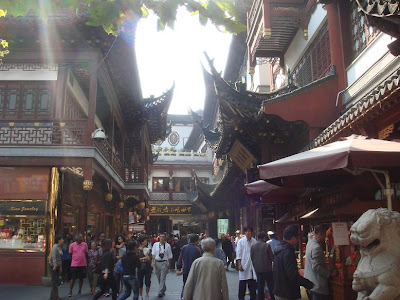 After Hangzhou, we returned to Shanghai 上海. According to my research, Shanghai is the largest city in the world by population with over 18 million residents and also the busiest port in the world in terms of cargo tonnage. Shanghai, as a global city, is a major financial and business center in China.

Shanghai is located on China’s eastern coast at the mouth of Yangtze River that pours into the East China Sea. It borders Jiangsu and Zhejiang provinces to the west. In history, Shanghai was a fishing village until Song Dynasty when it was upgraded to a market town in 1074. During Qing Dynasty, Shanghai became an important trade port in Yangtze Delta region.

In the 18th century, United Kingdom had a trade deficit with China since British purchased goods from China such as tea and silk while Chinese did not buy much from UK. To reduce the trade imbalance, British started selling opium to China. Soon many civilians in China were addicted to opium and their health became very bad. The government of Qing Dynasty sent the official Lin Zexu 林則徐 to ban the opium trade with UK, and this caused the First Opium War 鴉片戰爭. Because China lost in the battle, the Qing government was forced to sign the Treaty of Nanjing in 1842 which allowed British to dictate opening the treaty ports, Shanghai included, for international trade.

Later on, China was forced to lease out lands in Shanghai as concession territories to UK, USA, and France where it became 英租界, 美租界 and 法租界. This is called “Shanghai International Settlement” which lasted until the end of WWII.

Due to the special situation, Shanghai became a large city and home to many foreigners. In 1930s, it was the most important financial center, the largest and most prosperous city in the Far East.

Do you know the official abbreviation of Shanghai? In China each province has its own abbreviation. For example, the abbreviation for Jiangsu 江蘇 is 蘇 (Su), for Zhejiang 浙江 is 浙 (Zhe). Four most important municipalities including Beijing, Chongqing, Shanghai and Tianjin are also granted with an official abbreviation. For example, the abbreviation for Beijing 北京 is simply 京 (Jing). So what about Shanghai … if you live in Vancouver, you have probably heard of or been to the restaurant “Shanghai River” 滬江 in Richmond. The hint is very obvious already. Answer: 滬 (simplified character 沪; English: Hu)

It is nice to know the abbreviations since they appear on all motor vehicle license plates in China. The ones I saw most during this trip were starting with 蘇A, 蘇B, 蘇E which represent Nanjing (the capital city), Wuxi and Suzhou respectively, and 浙A for its capital city Hangzhou. Another one I saw a lot on the highways which I got no clue was 皖? It actually represents 安徽 (Anhui), a neighbour province to Jiangsu and Zhejiang. 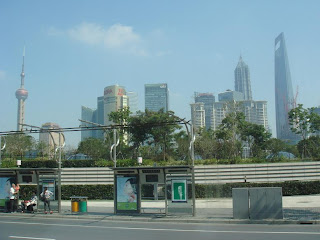 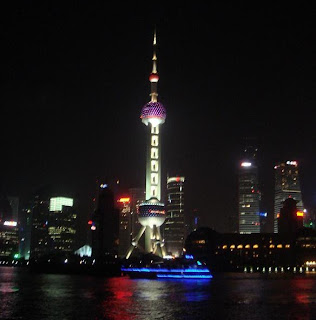 Here’s the skyline of Pudong in the day and evening. Shanghai downtown is separated into two districts by the Huangpu River 黄浦江, the last tributary of Yangtze before it flows into the East China Sea. Pudong 浦東 is a new district on the east side of Huangpu River 黄浦江. It is now an area with all the financial centers. The airport we landed is Shanghai Pudong International Airport 上海浦東國際機場 which was opened in 1999. Puxi 浦西 is a historic center of the city located on the west side of Huangpu River.

To bring us back mentally to the prosperous Shanghai in 1920s, our tour guide sang us a song “浪奔 (登登登) 浪流 (凳凳凳) 萬里滔滔江水永不休”... haha, a very famous Cantonese song from a super popular classical TV drama 上海灘 (The Bund) released in 1980. This TV series is about an action and romantic story set in Shanghai during the International Settlement period.

The real show we watched in Shanghai is a performance by Shanghai Era Entertainment which we saw the spectacular combination of traditional Chinese acrobatic arts and modern technology! Although the performance team was all Chinese, the production team including creator /visual director and composer/music director was from Canada. It was a full house 坐無虛席. After the show when everyone was coming out to look for their groups, I saw lots of flags … flags of local tour groups and foreign country flags for the Caucasian groups. It was like a gathering of 八國聯軍 (Eight-Nation Alliance). 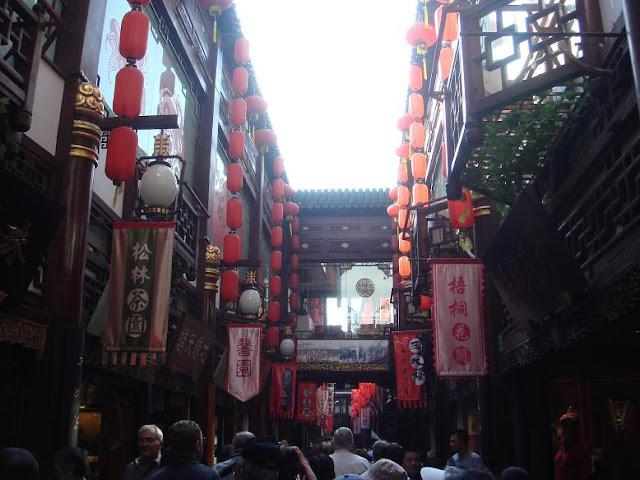 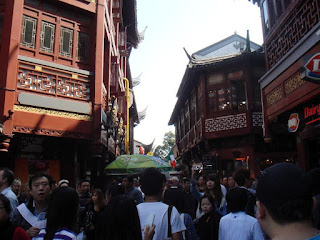 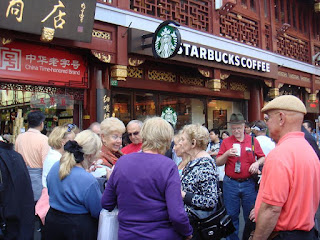 Next morning also the last day of the trip, we visited City God Temple of Shanghai 上海城隍廟. In the old days, City God Temple referred to a Taoist temple here. Now it refers not only the temple but the surrounding area with hundred stores and shops such as Chinese restaurants, Chinese boutiques, Chinese medicine herbal stores, Starbucks, Dairy Queen and Haagen Dazs, etc. It was full of tourists, both Chinese and foreigners. 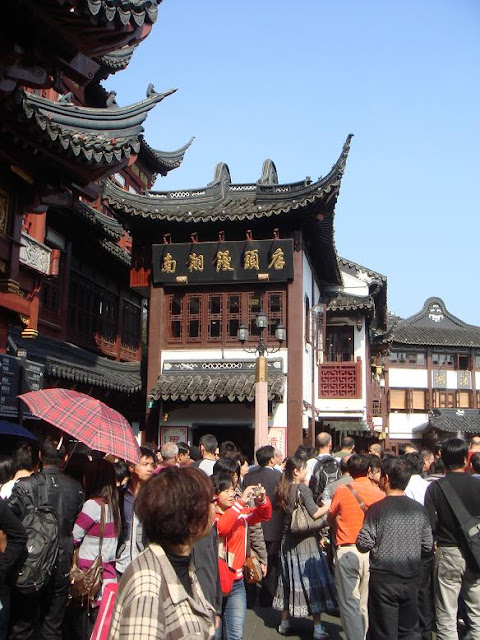 There was a very long lineup to 南翔饅頭店 where the famous steamed dumplings or little basket buns 小籠包 can be offered. What is special about 南翔 Nanxiang? How come it’s called 饅頭 (mantou) not 小籠包 (xiaolongbao)?

Today’s little basket buns were originated from 南翔 Nanxiang, a town located in Jiading district 嘉定區 where is a suburb of Shanghai. In 1871, a man named 黃明賢 created the little basket buns in his store next to the famous park, Guqi Garden 古猗園. Due to its popularity, it has expanded into downtown Shanghai including this one in City God Temple area.

According to Wikipedia, the name mantou is cognate to manty and manti; these are filled dumplings in Turkish, Persian, Central Asian, and Pakistani cuisines. In Japan, manjū (饅頭) usually indicates filled buns, which traditionally contain bean paste or minced meat-vegetable. In Korea, mandu (饅頭) can refer to both baozi (包子) and jiaozi (餃子). In Mongolia, mantuu are basically the same as the Chinese mantou. 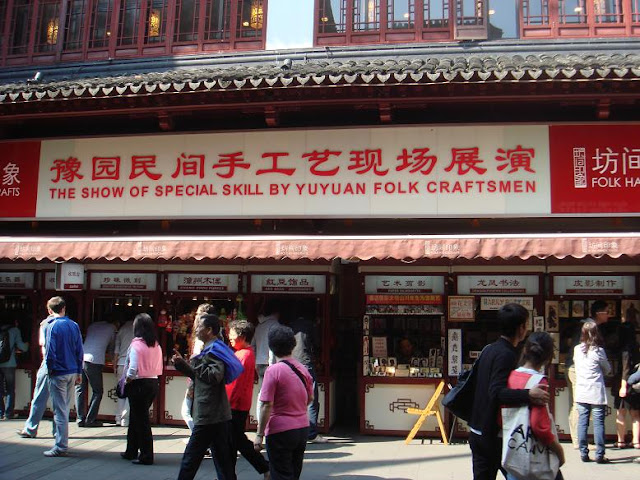 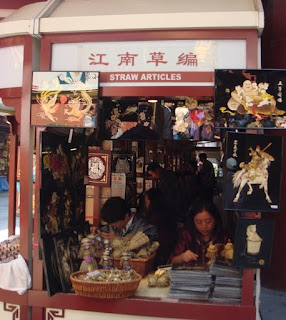 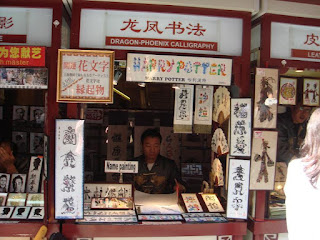 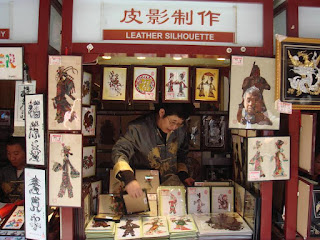 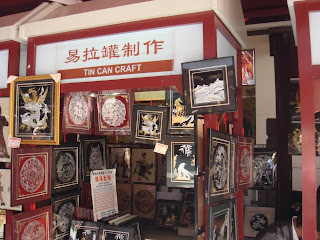 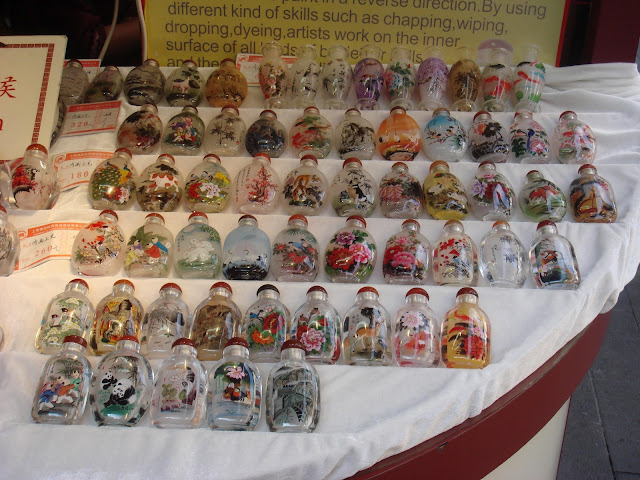 The folk handicrafts are very nice. I especially like the snuff bottles with beautiful Chinese inner painting (the use of a special paintbrush at a 90-degree angle to paint inside glass or crystal objects). 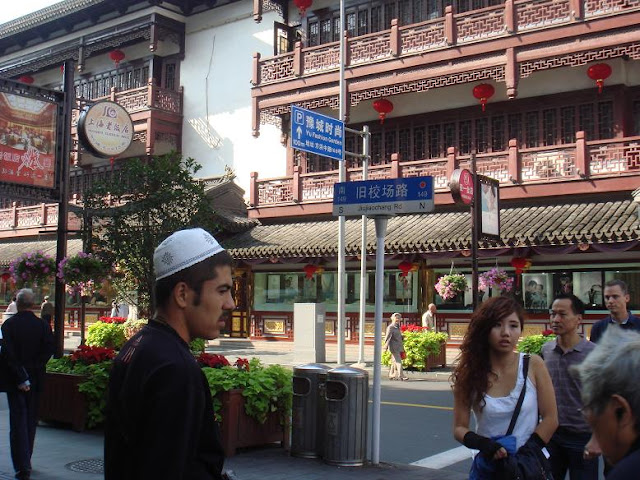 China has 55 ethnic minority groups that occupy 8.5% of the Chinese population and the guy with white cap in this photo must be one of them. The blue sign “Jiujiaochang Road” clearly indicates the direction of north (N) and south (S), I think the design is good as it makes the directions very clear. 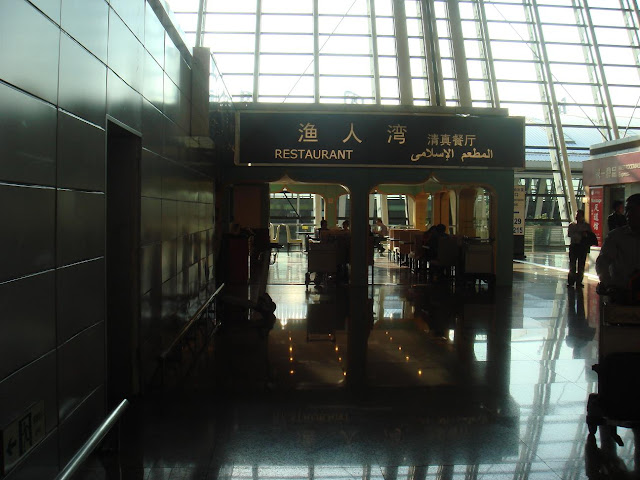 I was not surprised to see Muslim restaurant in Shanghai airport since there are 10 Muslim ethnic groups in China. To name a few: Hui 回族, Uyghur 維吾爾族, Kyrgyz 柯爾克孜, Salar 撒拉族 and Uzbek 烏孜别克族. Now Muslims are found in many regions of China. It is believed that Islam was brought into China more than 1200 years ago. But the greatest movement of Islam into China was in Yuan Dynasty (1271 – 1368) when the Mongol conquest of Central Asia and Persia, brought millions of administrators, generals and scientists into China. No wonder I saw quite a few 清真館 (Halal restaurants) there.

Overall, this trip was nice and enjoyable. The tour guide and bus driver did fulfill their responsibilities. Everyone in our tour group was friendly. One girl was about the same age of mine and we became good friends, hopefully we will stay in touch. A beautiful senior woman 靚婆婆 (age 79) told me that I’m the same age as her granddaughter before she left … but I think I might be much older than her granddaughter though. I am especially thankful for those who helped to take care of or entertain my mom when I was busy taking photos in the trip J
Posted by Andrea at 7:47 PM