More Fun for Olympics in Vancouver! 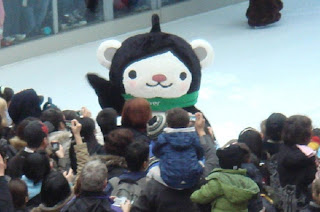 Only one and a half days in downtown during Winter Olympics was definitely not enough. So I went back on Feb 26. To maximize my activities there, I got up at 5:05 am, left home at 5:45 am and took Canada Line from Brighouse Station at 6 am. I’ve never taken public transit that early in Vancouver. There were lots of passengers and the train was getting full quickly! I was a bit sleepy, hopefully I didn’t look like a panda (with 2 big dark circles)! What waked me up in Canada Line were the colourful uniforms: sky blue volunteer jackets, red CTV Olympic jackets and jackets with big “CANADA” sign! Oops … mine was very casual but I have a grey-coloured Olympic hat. 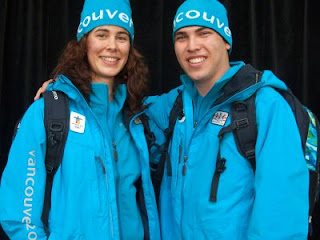 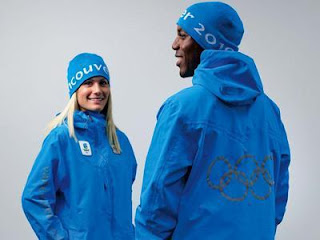 upper and lower photos - Olympic volunteer jackets. Free for the volunteers, now selling $150 to $200 each on eBay!
First stop for sure was Royal Canadians Mint, I really wanted to see the medals!!! I met my boyfriend there and we were in line just before 7 am. It was a drizzly morning so we had to stand in the rain for 3 hours. I think we were the first 130 in line and by 7:30 the line was very long already, at least more than 200. I was getting excited when we were very close to the entrance (only a couple in front of us), oh no … suddenly a group of 7 including 2 adults 5 kids cut the line!!! I thought only Asians like to do that but this family was Caucasian. Didn’t they feel embarrassed? Even more ridiculous was the Royal Mint staff didn’t say anything to them!

It was almost 10:20 am by the time we got in the room of medals for 2010 Winter Games where they would give out a short presentation, allow each visitor to take a picture with the medal, and provide information how the medals were made. Some interesting facts I learnt from there:

• Each gold and silver medal contains 92.5% silver and 7.5% copper
• 6 grams of gold are plated over the base of silver to make each gold medal
• The medals are among the heaviest in Games history at 500 to 576 grams each
• 615 medals produced for Olympic Winter Games athletes
• 399 medals produced for Paralympic Winter Games athletes
• The patterns of the medals were based on two large master artworks
• Orca design for Olympic medals
• Raven design for Paralympic medals
• The pattern on the medals are unique, no two medals are alike 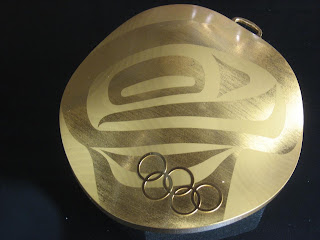 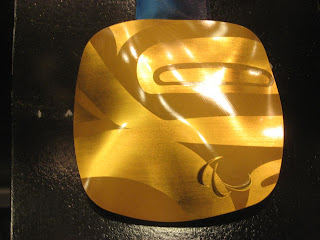 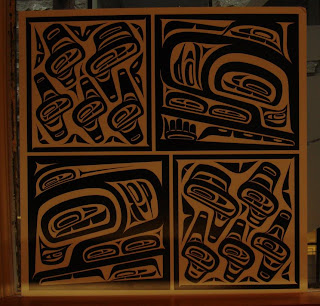 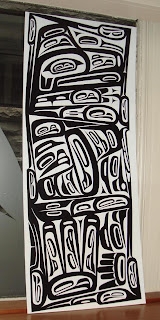 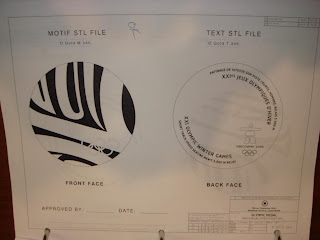 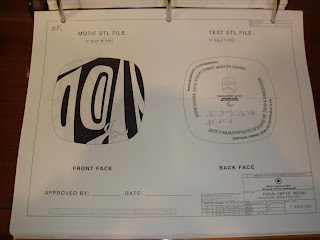 After the medals, we went directly to the line for holding the Big Shiny Gold Bar! Wow … we thought it’s easy to lift but it was quite heavy! My friend told me it’s about 20 pounds … no wonder. Even without the chain it’s difficult to be taken away. 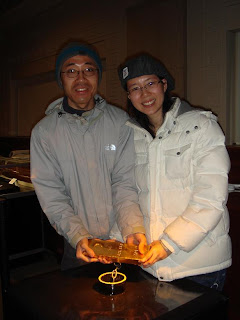 After we left Royal Mint, we had lunch at Kimono Restaurant which is near Take 5 Café. I liked it cuz it has a big glass window that we can see the busy Granville Street. But once I went in I found out everything was not as fancy as we expected. Interior was old, the floor was very ugly and dirty. The worst was washroom - ground was not too wet but terribly sticky. Food was not tasty as well. If you ask me the worst place of the day – I would answer “this was the one”.

Around 12:05 pm, we went to get free photo at Shaw Bobsleigh and Canadian maple on our faces … do we look cute? 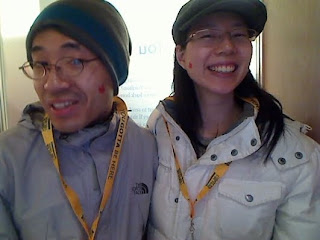 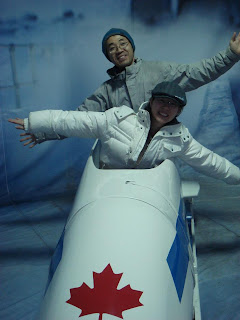 Then we walked back to Robson Square to line up for the Art Gallery. The line was moving quite fast and we got in within 35 minutes. Based on everybody’s comment, first thing to do in Art Gallery was going up to the top floor where BC Pavilion was held. I really enjoyed this Pavilion since I’ve learnt something about BC forest. I especially like its water curtain cave (水簾洞) – where we had to pass thru a thin layer of waterfall to get into another place. Sometimes I could see a screen of a family welcoming us on this waterfall … amazing! After passing thru the waterfall, we found some big touch screens and we played them like little kids. I really like their concept of indoor sunlight where natural light is used to replace electrical light. 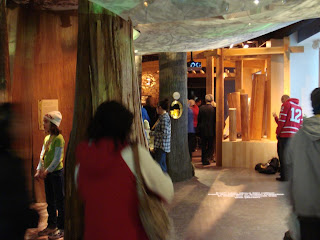 BC Pavilion in the Art Gallery 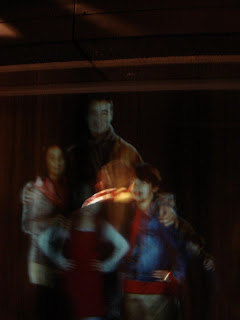 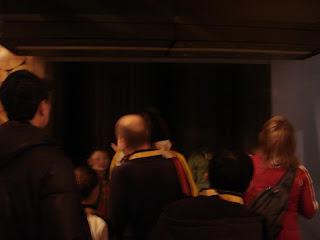 Visitors passed through the water curtain to the cave (another room). 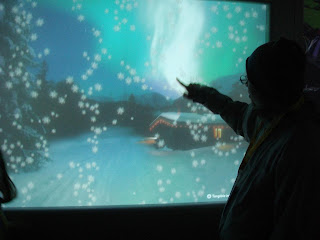 Just touch the big screen and snowflakes come out! 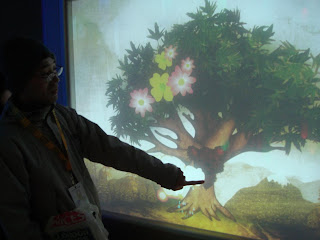 Touch the screen! Little bear (I don't know what exactly it is) comes out! Flowers blooming when the tree is touched!

Around 3:00 pm, we did another kid activity – watched mascots dancing show at GE Plaza! 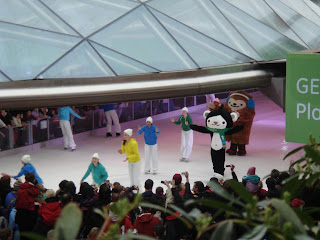 Then my boyfriend found a photo shop where pictures could be taken and placed on Vancouver Sun as headline. Since it’s free, why not have a try? There were 3 backgrounds to choose from: with mascots, on zipline or at GE Plaza. What? Maintenance Break for 30 minutes! The female staff needed a break … okay. Should we leave? I thought people would not stay in line but it turns out nobody left! People get used to be patient during these days so 30 minutes or even an hour was not a big deal. The lady behind us was a mom of 2 kids and she’s been to downtown 6 days in a row visiting all the sites to see which ones were suitable for her lovely kids … what a good mom! She said she lined up for Royal Mint for 6 hours!!! 35 minutes passed by the staff finally came back, an old Chinese man in the line was so excited to yell “Go Canada Go” … haha!

It was raining hard and cold. We were in the line for 1 hour and 15 minutes before getting into 4D theatre. There was a huge outdoor screen that we could watch the women curling. By 6:30 pm, I heard CTV announce the start of ice hockey game from GM place since we were just a block away from there. I’ve seen 4D before so it’s not special to me for the use of water spray to make the splash effect or for the artificial snow breeze effect. The only one I didn’t experience from previous 4Ds was the odour effect which I could smell chocolate flavour when the screen showed 4 men drinking hot chocolates … cool! 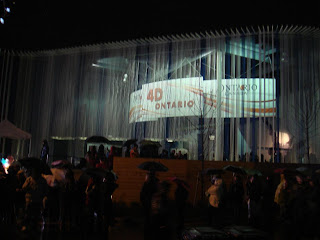 Ontario 4D Theatre - hundreds of people lined up for the 5 minute show! 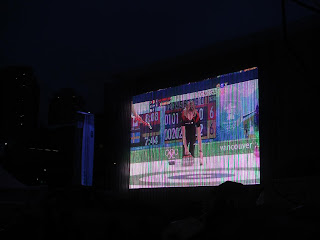 Huge outdoor TV showing the women curling game
By the time we got out from 4D theatre, it was almost 7 at night. We had dinner at Kentizen in International Village. It’s a medium size restaurant and only 5 or 6 tables occupied so it was very quiet. We picked this restaurant not for the food but for the comfortable seats and most importantly for the TV since we wanted to watch the hockey semi-final. We didn’t watch the whole game but the score was 3-0 (Canada-Slovakia) when we left. “For sure Canada will win!” that’s what we thought.

We walked to Four Host First Nations Pavilion since I wanted to take a spectacular photo similar to the one posted on citycaucus. Here's the comparison: 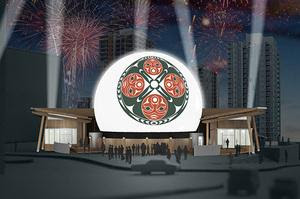 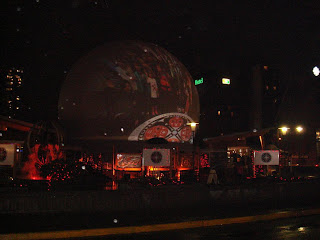 Then we went into a store in Queen Elizabeth Theatre where we could find number of Aboriginal merchandises. Guess what … everybody was watching hockey game on TV. Oh! How come the score became 3-2? Only 1 minute left before the game ended and Slovakia players were very close to our goal … I could read everybody’s mind at that moment: “don’t let them score please” 10-9-8-7-6-5-4-3-2-1 times up. YES! We Won!!! Everybody was so excited in the store!

The last stop we visited was vectorial elevation light display at English Bay which I felt calm and peaceful after whole day of excitements. Then I took shuttle bus C21 to Yaletown Canada Line Station. When I passed by Yaletown LiveCity I could hear the music there, it was almost 10 pm and more than 300 people lined up to get in. Many of them were very high (Of course, Canada won!) Now I believe Vancouver can be a very energetic city! 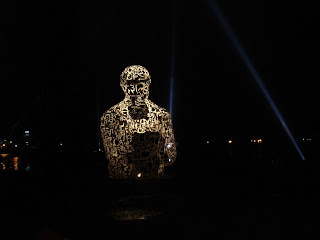 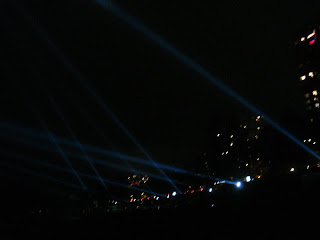 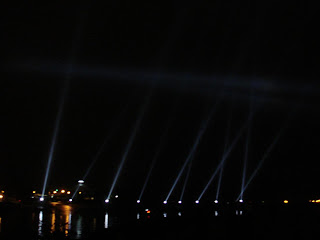