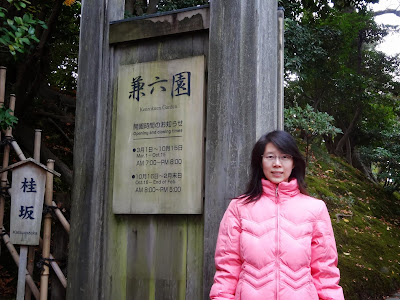 Next morning, we walked to Kenrokuen (兼六園), the best tourist attraction in Kanazawa, like a “must see” garden. Kenrokuen is one of Japan’s three most beautiful gardens, it was created from 1620s to 1840 in accordance with the standards from the book “Famous Gardens of Luoyang” (洛陽名園記) written by the Chinese poet of Song Dynasty, Li Gefei (李格非 - 北宋山東濟南詩人/詞人). If you are wondering who Li Gefei is, he is the father of a very famous Chinese female poet called Li Qingzhao 李清照. Do you still remember the phrase “人比黃花瘦” (skinnier than a yellow flower)? It was from the poem 醉花陰 (drunk in the shadow of flowers) written by Li Qingzhao. 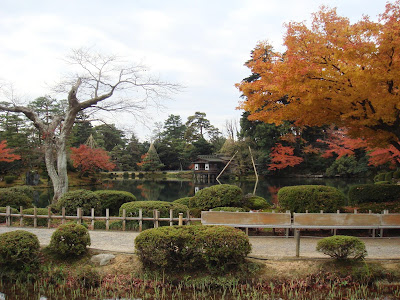 It was one of the best times to visit Kenrokuen since it was the maple season. YEAH! 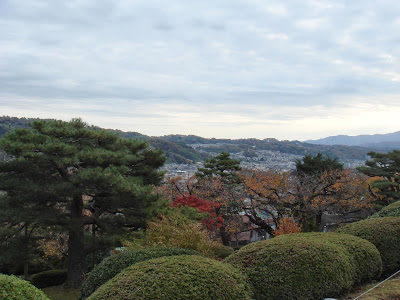 Overlooking the beautiful city of Kanazawa from Kenrokuen 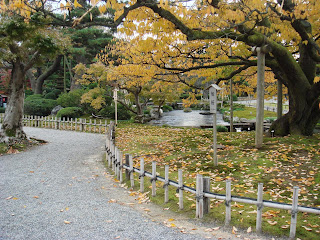 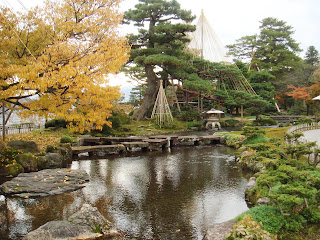 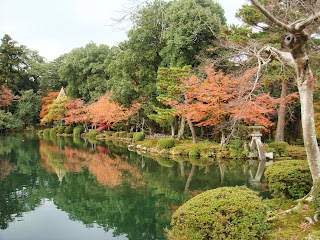 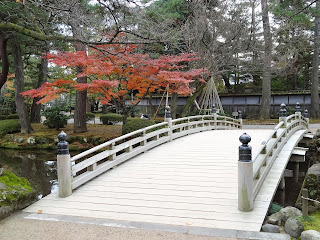 Did you notice some trees are roped with poles?  They are used to prevent snow accumulation on the trees. 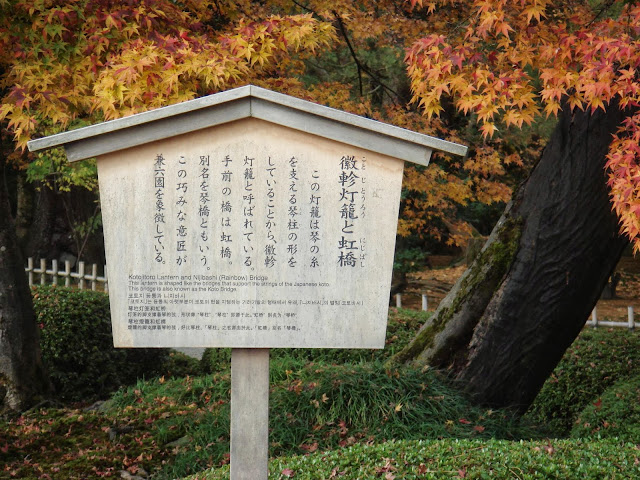 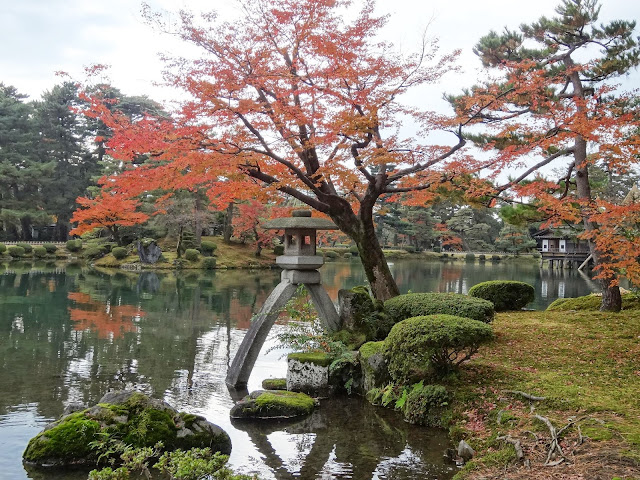 Of course the most representative spot would not be missed! Stone lantern with two legs is the symbol of Kenrokuen. 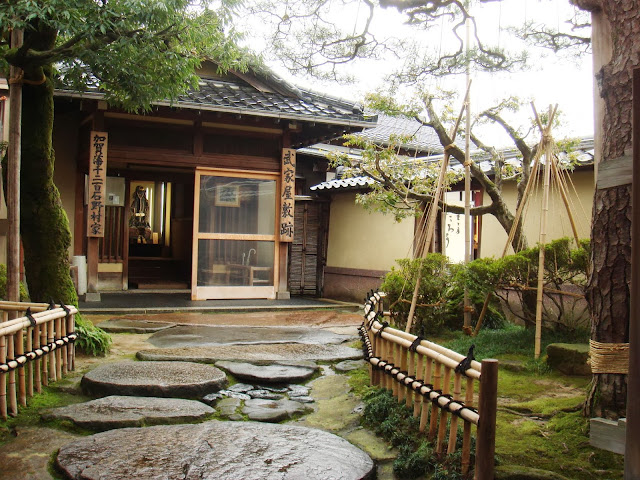 After Kenrokuen, we walked around Naga-machi Buke Yashiki District(長町武家屋敷跡), where the top and middle class Samurai (members of a powerful military class) who served Kanazawa Castle lived from 1583 to 1868. This is more like a historical site with an old canal, the alleys and mud walls of the old days. 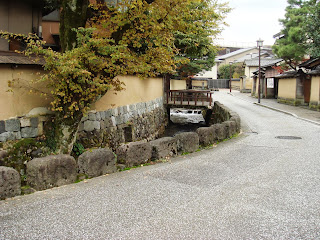 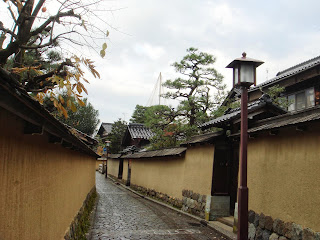 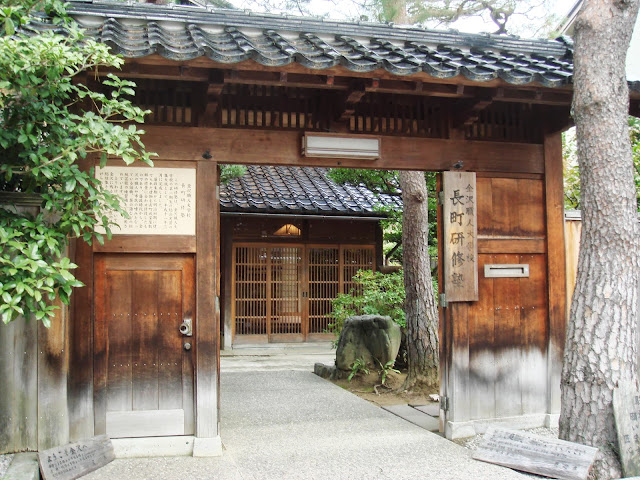 Woo … we found a traditional school (university?). I haven’t seen the word  “塾”for a long time. It made me think of 扑扑齋 … let’ go in and check it out! 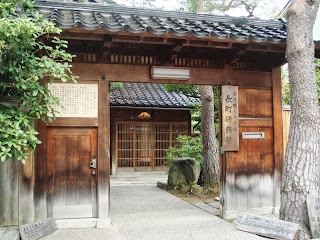 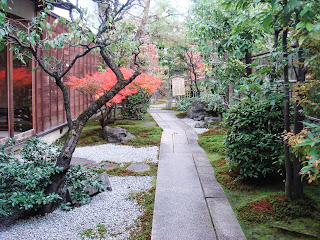 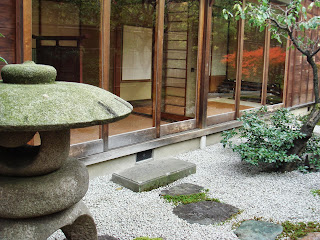 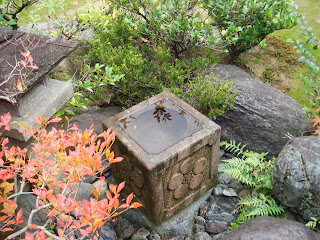 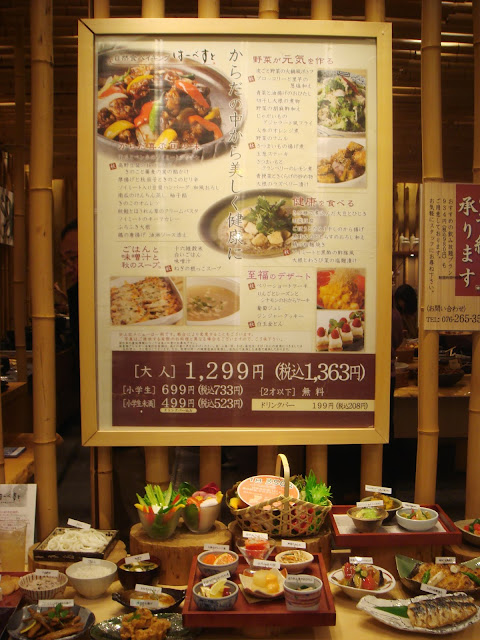 For lunch, we picked a restaurant that served similar buffet we had in 草楽 in Sakae, Nagoya. I think they are from the same franchise advocating local and natural food. I really enjoyed the meal and dessert there. I wish I could stay there longer but we were in a rush to catch the bus to Shirakawa Village 白川鄉. 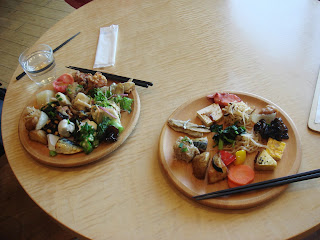 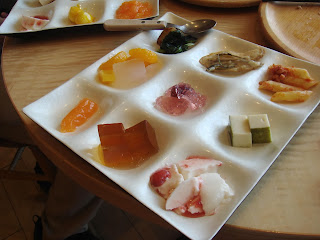 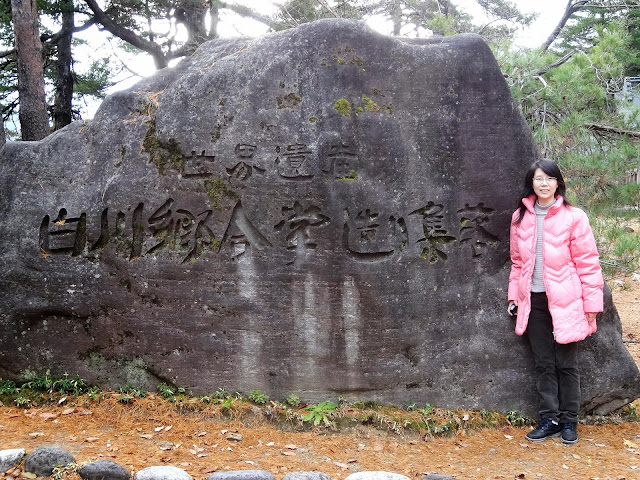 Second time to Shirakawa Village 白川鄉! Last time was in spring 2012. What are the same? The picturesque landscape and the ditch with fresh clean water. What are the differences? The autumn feel with many persimmons 柿 and dryer weather. 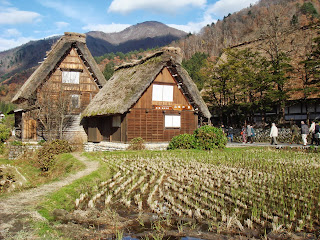 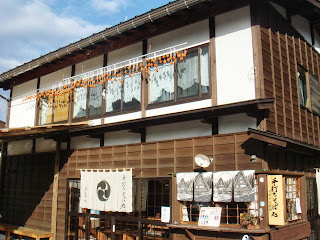 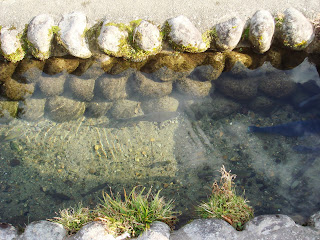 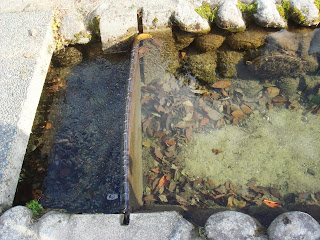 First time visited Shirakawa Village, I was completely impressed by its clean ditch with fishes in it. I thought the fishes can swim freely through the whole ditch until my boss told me that there may be blocks. So this time I did a thorough investigation to conclude that the spaces are divided with blocks … it’s more like fish in jail L 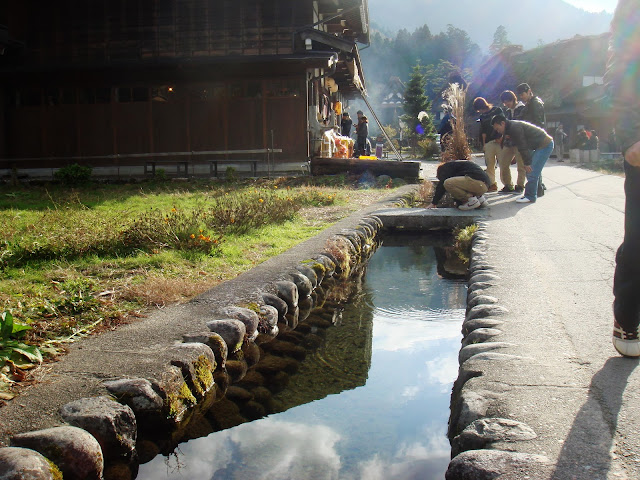 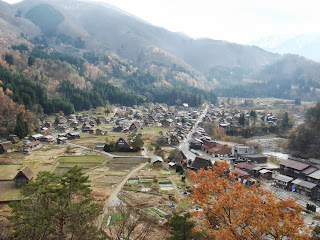 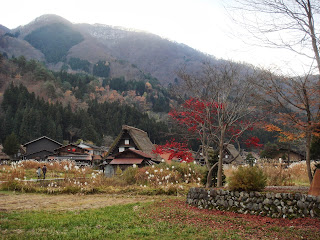 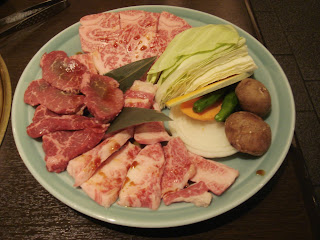 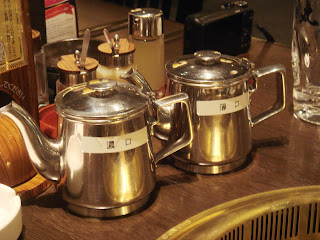 We left Shirakawa Village and headed to Takayama 高山市 in the late afternoon. It was dark upon arrival so we had a very nice BBQ dinner with famous Hida beef 飛驒牛 in a very spacious but only half full restaurant. What are these sources 濃口 & 薄口? Any guess? 濃口 means strong taste so it is strong soy source. The opposite is薄口, light soy source.
Posted by Andrea at 7:45 PM