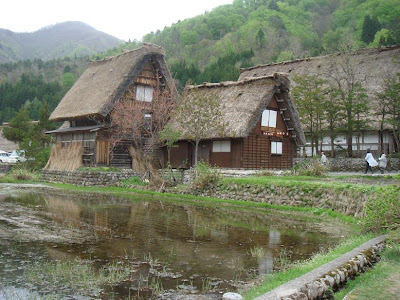 The next two days my friend and I travelled to Gifu Prefecture 岐阜縣, just north of Aichi Prefecture 愛知縣. I insisted to visit Shirakawa Village 白川鄉 since it looked like a village in fairy tale from a photo! I searched a lot and found it situated in Gifu 岐阜. I was pretty sure 岐阜 are kanji (Chinese characters) which I had never seen before. How to pronounce these rare characters in Cantonese??? Japanese pronounce it as Gi-Fu, maybe it sounds like 肌膚 in Cantonese? The correct pronunciation in Cantonese is 奇埠. There is a meaning behind: the first character comes from Qishan (岐山), a legendary mountain from which most of China was unified, whereas the second character comes from Qufu (曲阜), the birthplace of Confucius. Interesting! 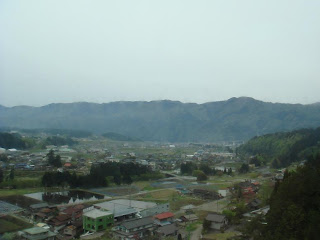 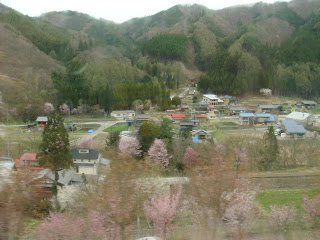 We took an express Gifu bus 岐阜バス - 白川郷線 which departed from Nagoya station at 9:00 am. Since the distance was long, it took almost 3 hours to get to Shirakawa Village with the fare price ¥ 3500 (around CAD 43.00) each. The bus was about half full and there was a Cantonese couple! Above are some of the natural sceneries I saw on the way to Shirakawa. Unlike Aichi Prefecture, Gifu has more green fields and mountains.

Because it was a long trip to Skirakawa, passengers were allowed to go to washroom at two major bus stops. One of the main stops was 桜の郷荘川 (Shokawa Valley?) where I found an information centre with some nice brochures about this area. There should be natural hot spring and five water wheels nearby. 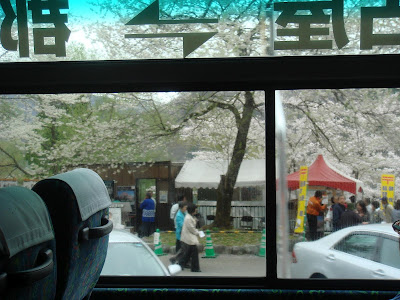 Not far away from 桜の郷荘川, our bus passed by two giant cherry trees - 荘川桜 (Shokawa Sakura). The view was very spectacular since it was cherry blooming season! The trees are about 450 years old and have been transplanted from its original location when the dam was constructed. Too bad the view was on the right side of the bus while I was sitting at the furthest left L. That’s the best photo I could take. 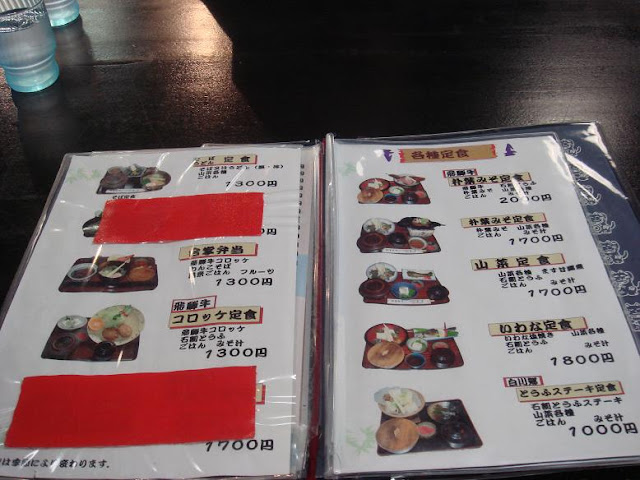 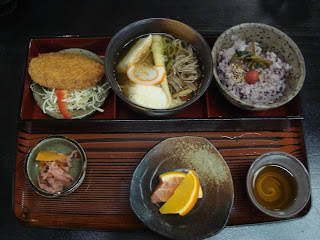 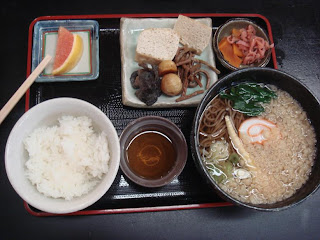 We arrived Shirakawa Village 白川鄉 at 11:50 am and started with lunch first. Gifu is mainly divided into two regions – “Hida” 飛驒 in north and “Mino” 美濃 in south. Shirakawa Village is located in north western part of Hida region where we can find the famous Hida Beef 飛驒牛, one of the top quality beef in Japan. By the way, 驒 was another kanji I’ve never seen before. How to read and what is the meaning? Cantonese sounds like 駝 and it means dappled horse.

There was Hida Beef set meal for ¥ 1300 on the menu, let’s try! It was kind of disappointing since I could only taste potato even though it was called potato cake with Hida beef. No wonder the combo wasn’t too expensive. Another specialty I tried was Hida Soba 飛驒蕎麥麵, noodles made from buckwheat which was not bad. 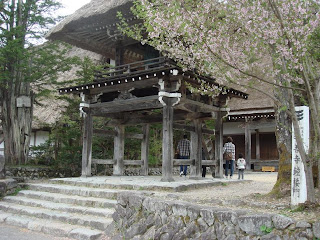 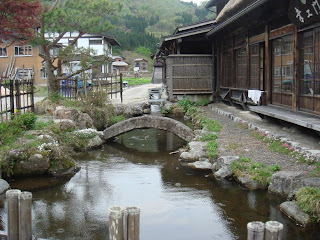 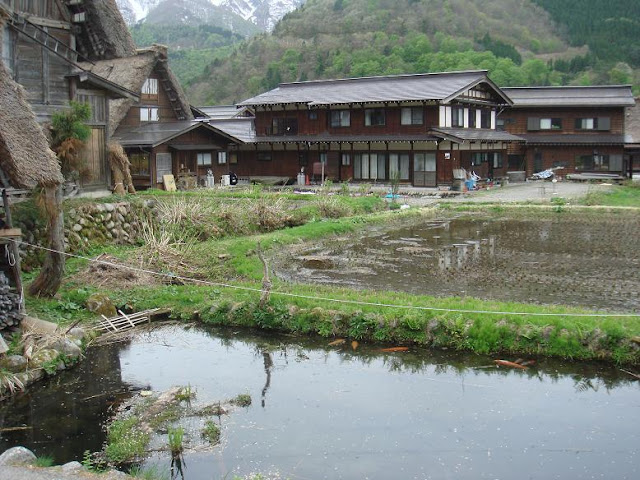 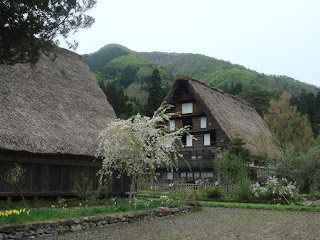 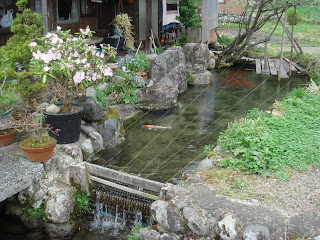 Here was the exciting walk after lunch! Wow! Sooo Beautiful!!!

According to the website of Gifu Travel Guide: “Hidden away deep in the mountains is this quaint settlement in Shirakawa Village that is famous for its gassho-zukuri houses whose grand roofs resemble hands clasped in prayer. Many of these houses are still inhabited to this day, and together with their adjacent rice paddies, they paint an incredibly picturesque landscape that is a joy to behold and to take a stroll through. The Shiroyama Viewpoint offers a great panoramic view of the settlement in its entirety.” 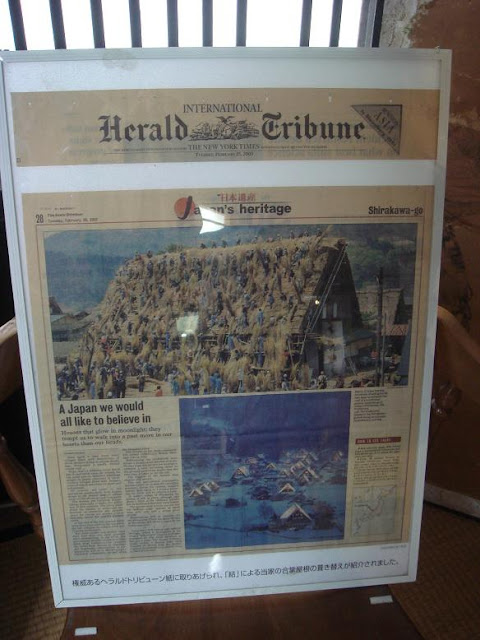 Now the village is considered as World Heritage and it was listed on English newspaper. Here’s the detail of the structure of its traditional houses from Shirakawa-go homepage:

Gassho-zukuri is a house built of wooden beams combined to form a steep thatched roof that resembles two hands together. In Shirakawa, they are called "Kiritsuma-Gassho-zukuri," and the roof can looked triangular just like a standing book open. It is the characteristic of these houses in this country. The structure is built to suit the environment in Shirakawa. It is made to withstand heavy snowfall. The houses face north and south, to minimize wind resistance. They are also built to feel comfortable in both summer and winter. The houses stand in a certain direction to adjust the amount of sun in order to keep the room cool in the summer and warm in the winter.

You may wonder how often the thatched roof needs to be replaced. A gassho-zukuri house is re-thatched by 200 villagers every 30 to 40 years. 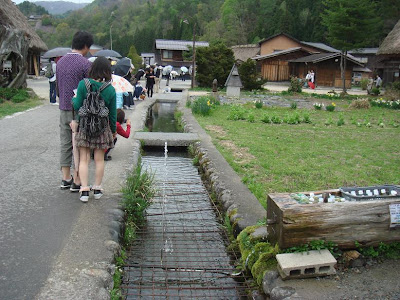 How come visitors were looking at and taking pictures of the ditch??? 溝渠都好影??? 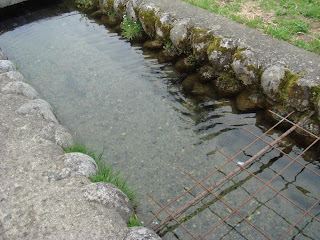 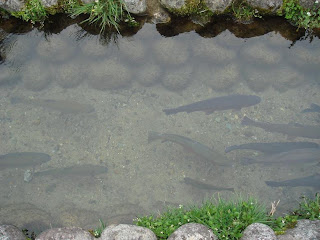 OH! There were fishes! The water was so clean that we could see the fishes clearly. 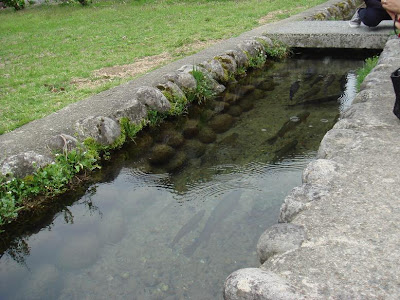 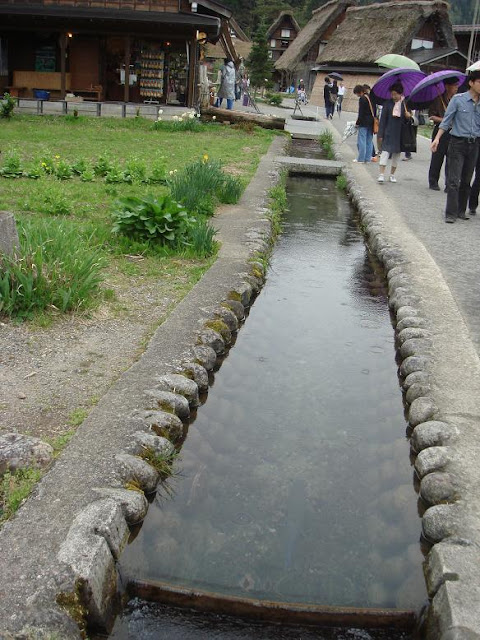 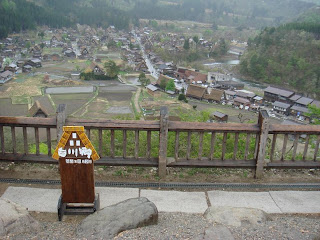 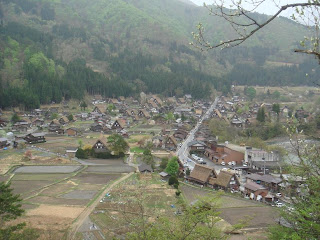 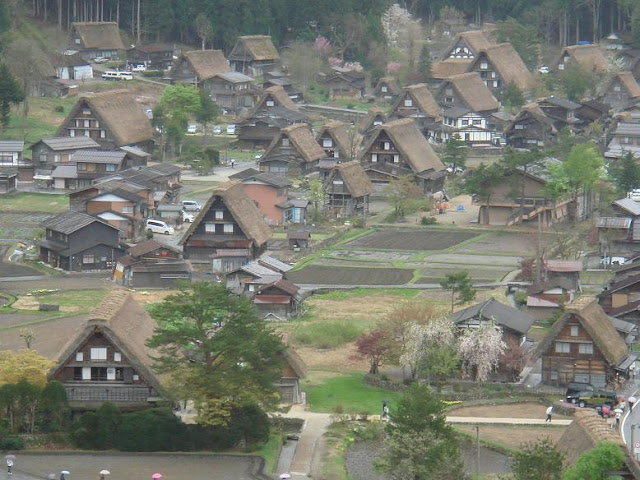 Ogimachi 荻町 is the main and largest village in Shirakawa where several dozen gassho-zukuri farmhouses are preserved, some of them are more than 250 years old. Instead of taking a shuttle bus, we walked up to the top of Shiroyama Viewpoint 城山觀望點 where the whole view of Ogimachi could be observed. It only took 15-20 minutes to reach the top and I still recall breathing in the super fresh air during the walk in the light rain shower. 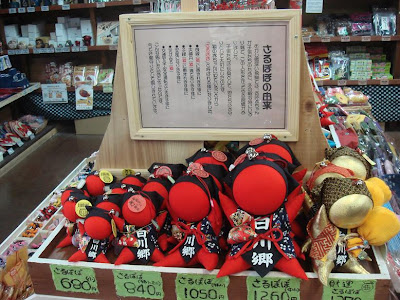 Sarubobo (baby monkey dolls) could be found in many souvenir shops there since sarubobo is the mascot of Hida region and were traditionally made by grandmothers for their grandchildren as dolls and for their daughters as a charm for good marriage and easy birth delivery. 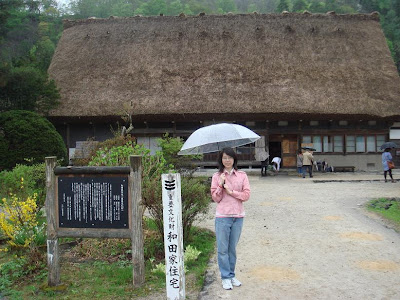 I really love Shirakawa Village! It is one of the most beautiful villages I’ve ever seen. I wish I could stay there longer but I had to catch the Nohi bus at 4:00 pm to its neighbour city, Takayama 高山.
Posted by Andrea at 10:11 PM