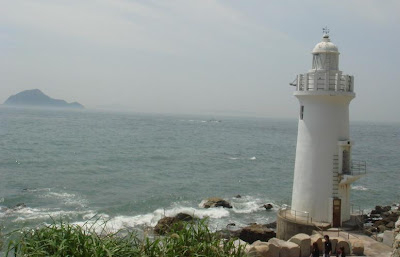 On the second day we travelled to Cape Irago 伊良湖岬 in Tahara City 田原市, which is situated in Atsumi Peninsula 渥美半島, the most southern part of Aichi Prefecture. Even though Tahara is not a popular tourist place for foreigners, I was attracted by the online photos of its Irago Lighthouse and Koijigahama Beach. I found this city very lovely by reading its information. There are several projects making it into an eco garden city: introduction of solar generated power at its public facilities, use of waste vegetable oil as fuel for school buses, and recycling of combustible wastes into carbon.

From January to March, colza flowers 油菜花 can be found in the fields and also along the streets of Atsumi Peninsula. Cherry trees 櫻花 are in bloom around late March and early April in Atsumi Peninsula. If I had visited Tahara three weeks earlier, I may have had a chance to see the beautiful view of colza flowers with cherry blossoms at the same time. We have blueberry and strawberry picking in Vancouver while they have strawberry and melon picking in Tahara.

In the morning we took the train “Meitetsu Kowa Line” 河和線, from Nagoya Station to Kowa Station 河和駅. Instead of riding a free shuttle bus to the ferry station in Kowa, we went there by foot. 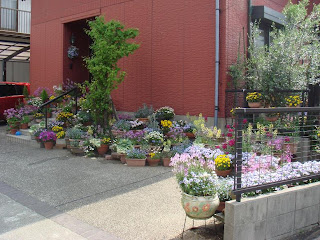 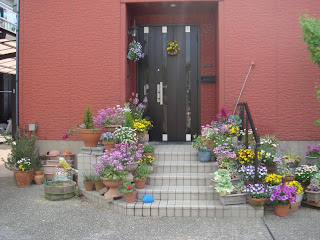 Kowa is a small and quiet town. On the way, we saw this private house with flower pots in its front and side yards! How lovely J 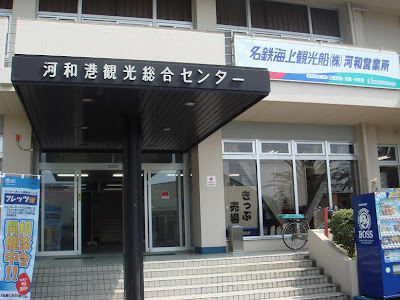 After 10 minute walk, we reached Kowa ferry station. The size of the ferry station was small (I think less than 1000 sq ft.). In the station, there were ticket centre, brochure section, tiny convenience store, vending machines with hot and cold beverages, and three or four sofas. 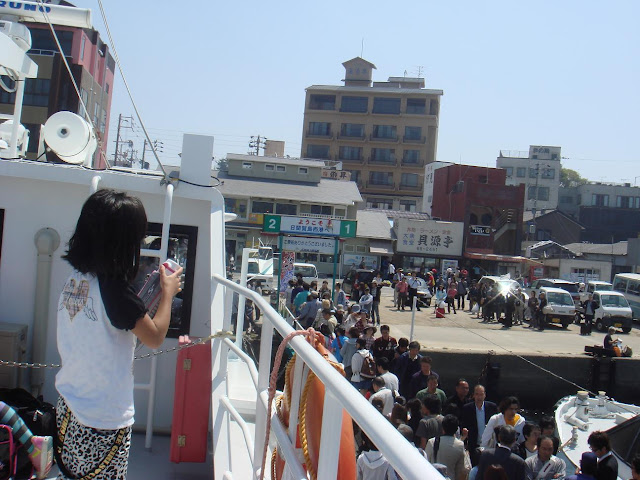 This was the high-speed ferry 高速船 we boarded. There were three stops: Himakajima 日間賀島, Shinojima 篠島 and Irago 伊良湖. The ferry travelled along Mikawa Bay and first reached Himakajima where the size of the island is 0.75 km2  with 6 km coastline. Even though the island is very small, it has population of more than 2000. You can see how many local tourists in Himakajima from the photo. I think they came there mainly for fishing and enjoying the seafood such as octopus and blowfish in restaurants. 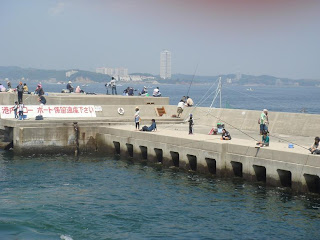 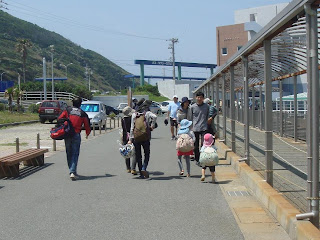 I saw quite a few fishing vessels on Mikawa Bay, there must be plenty of fish in the bay since many people were fishing near the port of Himakajima, Shinojima and Irago respectively. After 50 minutes of ferry ride, we finally arrived at Irago. YEAH! I saw a little girl carrying a huge backpack … suddenly the cartoon girl from animation “My Neighbour Totoro” 龍貓/となりのトトロ came up in my mind. 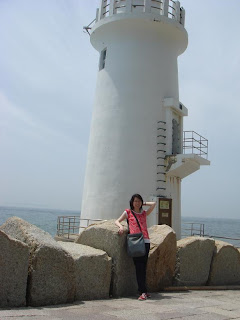 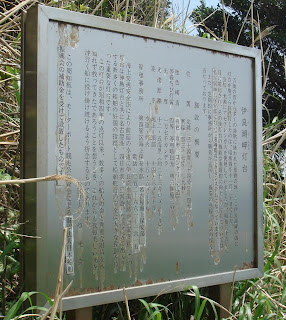 There are two paths to Irago Misaki Lighthouse 伊良湖岬灯台: either by the shore or along the trees. Somehow we walked through the latter one where we didn’t see anybody around except one Caucasian cyclist. I thought I would be the only foreigner there since I only saw local Japanese from Kowa to Irago. 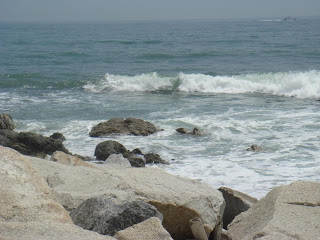 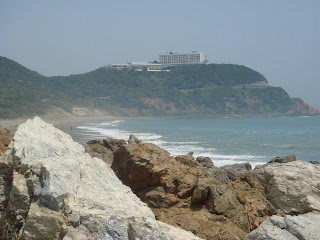 Let’s keep walking! What a beautiful day! Do you know what ocean is this?


Ahead was another famous spot - Koijigahama Beach 恋路ヶ浜, an approximately 1 km long sand beach. It forms a smooth curve shaped like a bow. 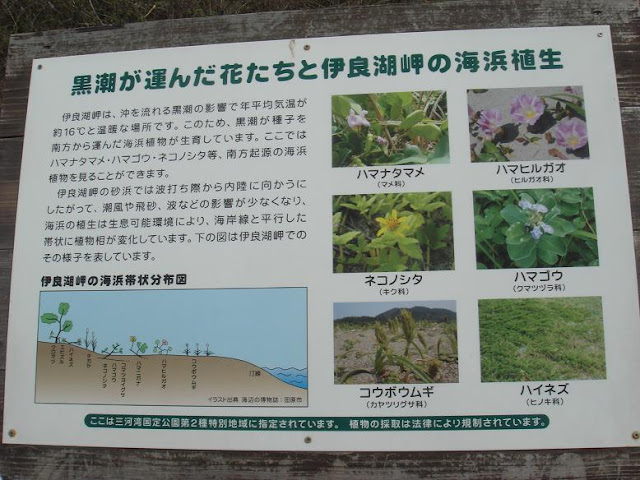 I think it talks about the plants can be found along Irago Cape and the picture shows distribution of different species on the beach. 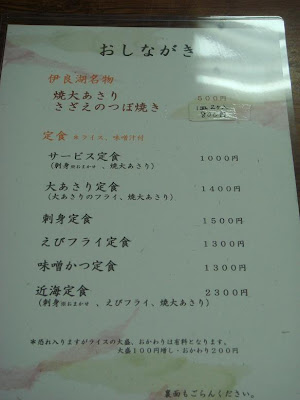 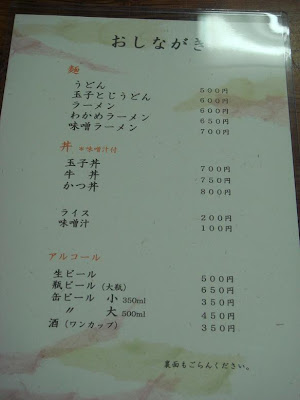 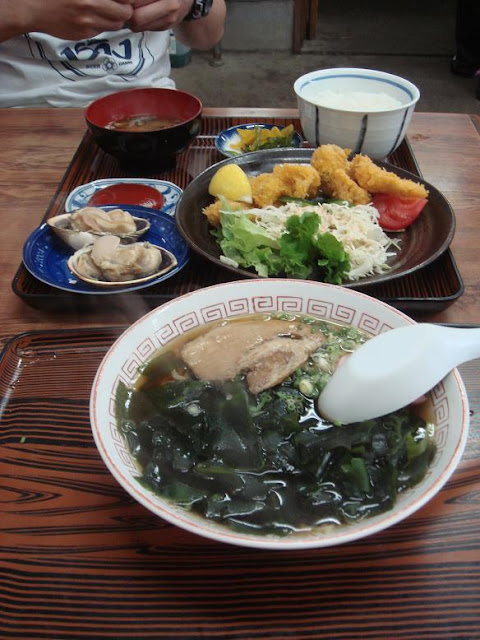 Atsumi Peninsula is famous for O-Asari (giant short-necked clam) 渥美の貝, almost every restaurant offered roasted o-asari as signature dish. After walking along Koijigahama Beach, we found a few restaurants which were located side by side to each other. They were typically divided into two sections – with the front selling souvenirs, local snacks, fruit, and coconut juice, the back serving meals to customers. Since it was weekend and also the Golden Week, many restaurants were quite full. We picked the one with one or two empty tables. I forgot what exactly we ordered from the menu, I think it’s the ¥ 1400 meal set from 定食 and ¥ 600 or ¥ 650 noodle bowl from 麵. I tried the roasted o-asari which was okay, it tasted different from the clams I had before. I also tried the clam filet (the ones with the salad, I think they were deep fried). 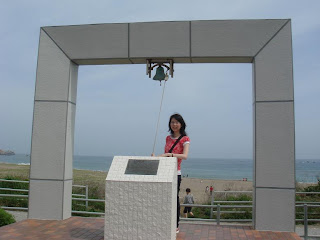 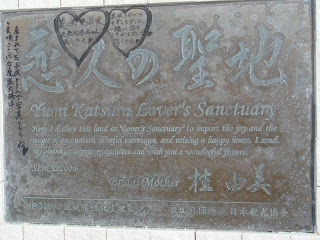 Here’s another scenic spot – Lover’s Sanctuary, just across the restaurants. Ring the bell … Ding Ding Ding!!! Oh … graffiti on the public property! I thought Japanese are quite discipline, still I could find a waste bottle in the sea and graffiti in Irago. Well, Vancouver is the same too. I wonder what country is free of graffiti and litter, maybe Singapore? 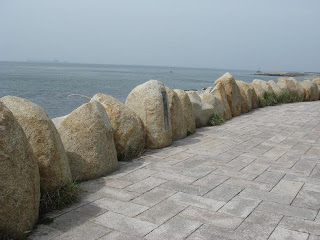 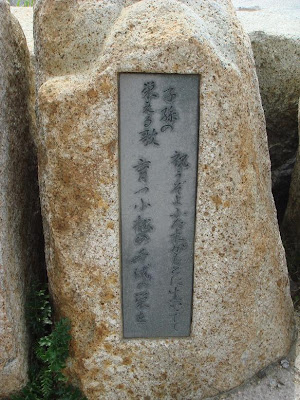 This time we walked along the shore back to the Port of Irago. On the way I saw quite a few stones with poems. The poems were not all written by poets, some were from high schools and even elementary schools. Maybe I could guess the content by reading some kanji. For example, pond 池 something something water 水, wind 風 something something rain 雨, lake 湖 something something moon 月(乜乜池乜乜水乜乜風乜乜雨乜乜湖乜乜月) Anyways, they are all about the beauty of nature, I think. It’s interesting that the poems were not necessary about the scenery of Cape Irago, they could be anything such as offsprings 子孫 and miscarriage 流產. 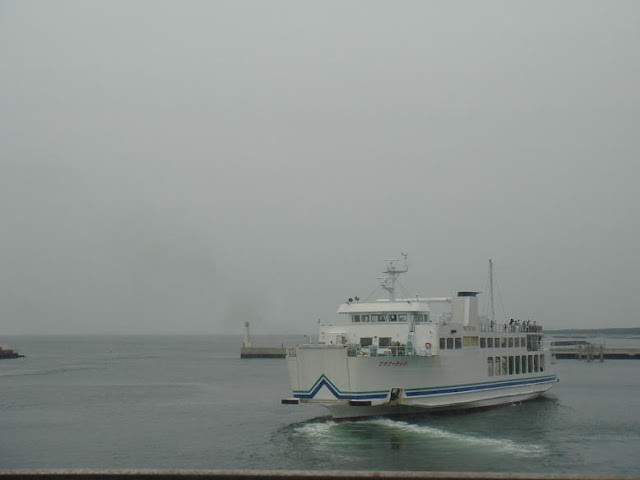 Upon return to port of Irago, we still had 30 minutes before the ferry departure. So I tried the melon ice cream (delicious J) and shopped in a medium size supermarket where it sells Tahara specialities, local souvenirs and even specialities from Okinawa. After shopping, my friend suddenly yelled at me. What’s Wrong??? OH! I got sunburn on my arms. That’s the high speed ferry for the ride back to Kowa. 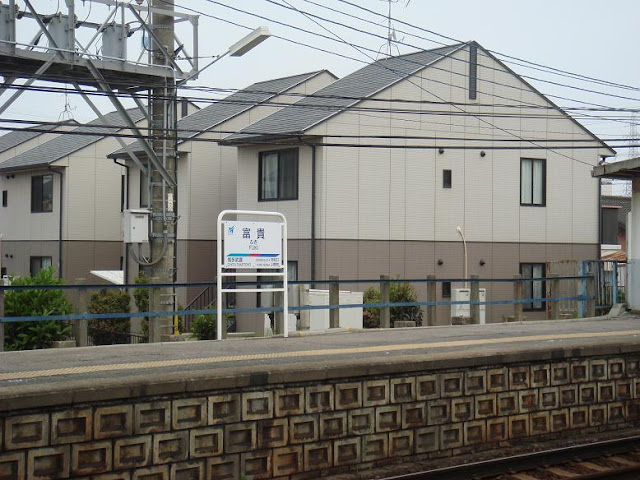 After we got back to Kowa, we walked to the train station. This time we had to transfer to another train at Fuki Station富貴. 富貴 in Chinese characters means wealthy but the town was as small and quiet as Kowa. Maybe local residents are mentally wealthy which is a happy sign!

While on the train to Kanayama 金山, I was looking at the screen displaying news in Japanese words which contained kanji, haragana and katakana. I read 王子 (prince), 英国 (England), 記念日 (anniversary) … OH! April 29, the wedding anniversary for Prince William! My friend was shocked that I could understand the news!!! Actually in Japan 50% chance I could read since part of their writings contain kanji, just the same as Chinese characters 漢字. 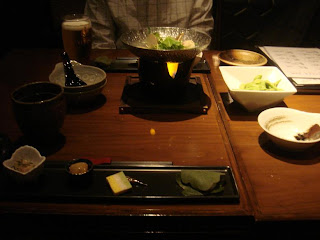 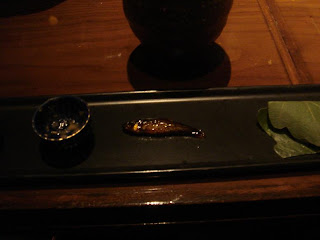 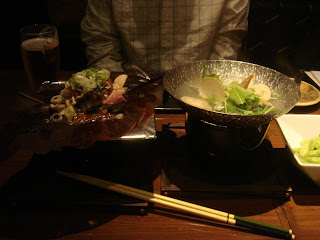 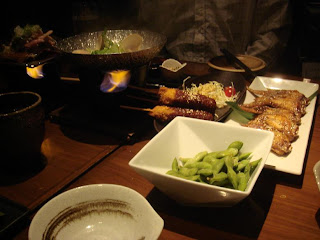 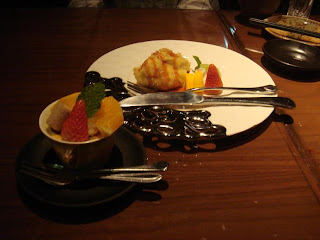 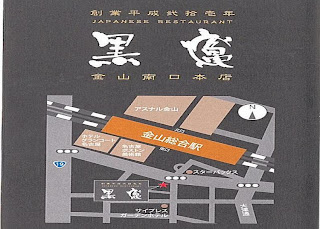 For dinner, my friend brought me to a restaurant serving very local Nagoya cuisine in Kanayama 金山. I recall it was located below ground and some small sandalwood incense coils 檀香 were placed at the corner of its stairs. The light was a bit dim, not sure if a typical or traditional Japanese restaurant is like that? To order or request for a service, just ring the bell on table. We ordered appetizer (the rectangular plate with tiny fish in the centre), something with red miso paste in a leaf (好濃味呀! Too Strong!), pork cutlet with red miso sauce (same comment), deep fried chicken wings (tasted okay, a bit spicy with pepper favour), clam soup and edamame beans. Of course my favour dish, dessert, would not be missed!
Posted by Andrea at 10:12 PM