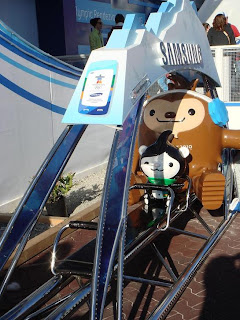 What’s the population in Metro Vancouver? I guess less than 3 million, the land is definitely bigger than Hong Kong with less than half of HK population. But these days since Winter Olympics started, many places here are full of people – Canada Line was packed (sometimes even 101% full), Richmond ozone was more crowded at night, normally street is quite empty after 8 pm but I saw lots of people on no. 3 Road in Richmond after 9 pm. I really feel like living in a busy city such as Hong Kong these days.

I really enjoy the Olympics spirit and atmosphere since it is now hosted in Vancouver. It’s very amazing to see vehicles with Canadian flags, people wearing Canadian shirts or jackets, kids with Olympic logo painted on faces and also hear people saying “Go Canada Go” or yelling when a Canadian athlete won a medal.

Because of the Olympics, there are many free events in downtown Vancouver and also Richmond Ozone. One thing very special besides Olympics was Feb 14 – everybody knows it is Valentine’s Day but it was also the first day of Chinese New Year! Next time these two occasions will fall on the same day again will be in 2048, I think I will be an old woman by then.

7:56 am - taking bus to Canada Line. Lots of people when I arrived at Canada Line. Somebody was handing out Province (newspaper) for free! I took Canada Line from the Terminus (Brighouse Station). Train was empty but filled up in 10 seconds, I found it embarrassing to fight for seat so I attempted to get a good spot for standing but a woman tried to take the spot from me. Never mind I’m younger than her (in appearance … hehe). Good that I got on the train at Terminus, it was getting more and more crowded at other stations, at that moment I felt that I could hardly breathe.

8:40 am – arrived downtown Vancouver. First thing to do was to find my boyfriend in the line for ziptrek. Too bad the staff there wouldn’t allow me to get in and she told other people the waiting time for ziptrek was six and a half hours (yes, you didn’t read it wrong … it was 6 ½ hours!!!). Anyway I’m not a big fan of zip line … I didn’t want to be a scary cat when I got up there. So I headed to other free events. (My boyfriend was there at 7:30 am, ziptrek started at 10 am and he finally tried it at almost 1 pm – waiting time 5 ½ hours but he enjoyed it very much though)

9:00 am – passed by London Drugs, many Olympic merchandises on sale, 50% off! Good deal eh. But I didn’t but any. Now I want to buy some since many people are using them and wearing them now. Before I didn’t pay much attention to the mascots but now I really like Miga. I heard people have to lineup for 1 or 2 hours to get into downtown Bay for the Olympic merchandises!

Based on wikipedia, here is the description of 2010 Winter Olympic and Paralympic Games mascots: 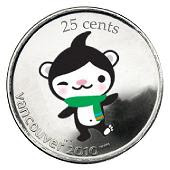 Quatchi - A sasquatch from the mysterious forests of Canada and dreams of being a hockey goalie.

Sumi - An animal guardian spirit with the wings of the Thunderbird and legs of a black bear who wears a hat of an orca whale. Sumi is the mascot for the Paralympic Games

Mukmuk - A Vancouver Island marmot described as "small and friendly" 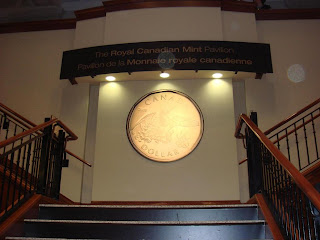 9:10 am – arrived at the Royal Canadian Mint Pavilion. Lineup was extremely long for seeing the Olympic medals, there’s a chance to hold a gold medal but 3 hours waiting! No way, I needed to join my boyfriend before 1 pm. Fortunately there’s another line to see gold coins, gold bars and a big gold coin worth 1 million! Wow … let’s go for this line … waiting time wasn’t bad only for 45 minutes. 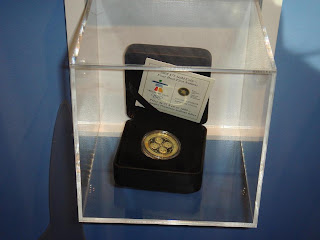 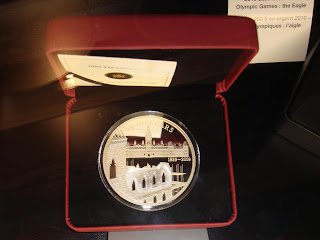 picture on coin = construction of Parliament 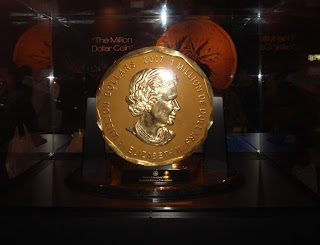 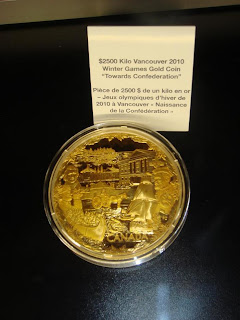 12:10 pm – went back to Robson Square to take a video for my boyfriend’s zip lining. Gosh … I’ve never seen that many people in downtown, even an old local man asked me “do you believe that?” Sun was strong. I tried to have my camera focus on the zipline but it’s difficult since the screen was too shiny. I received a call from my boyfriend at 12:55 pm telling me he’s up there so I kept videotaping people when I saw them coming(2 playing at the same time). 1st pair he’s not there, 2nd pair he’s not there, 3rd one no, 4th one no … Oh my god! I was tired holding my camera under the strong sunshine. How many more pairs before his turn? Finally I saw him on the 5th pair. Good my task was done! 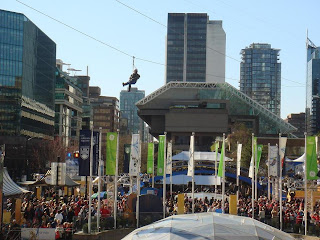 The lady was stuck in the middle of zip line so she was hanging above Robson Square .

1:10 pm – went to Sinclair Centre for lunch since it was not as crowded as Pacific Centre. There were some nice Native art displays.
2:30 pm – walked over to Canada Place for more Aboriginal arts 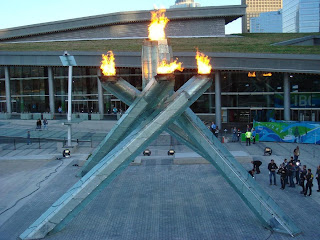 4:00 pm – Lineup for the Olympic Cauldron. By the time we got up there it was almost 4:55 pm. The Cauldron was huge! Made me think of the episode song from martial art drama “The Heaven Sword and Dragon Saber - 倚天屠龍記”on TVB in the 70’s: 熊熊聖火 憐我苦痛多 明明亮光 為我消災去禍 … Olympic Flame! Bring me Luck!!!!!!
In the evening, we walked to BC Hydro Power Smart Village. Nice little village … nice displays. I like the very tall sculptures made by red cedar. They were made by a worker from BC Hydro who is a native. There was also some information about three other BC Hydro workers being Paralympics athletes … very encouraging! 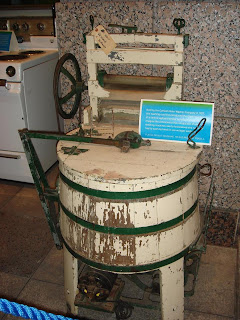 An old washing machine manufactured in 1927 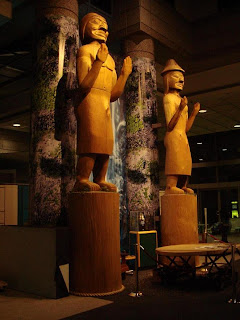 tall sculptures made by red cedar 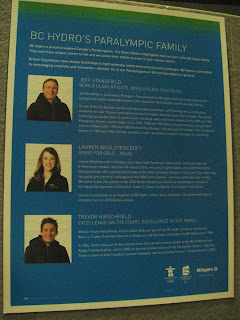 Then we kept walking until Vancouver Community College where the Aboriginal Artisan Village was held. I was tired already but there were three kinds of artwork that impressed to me 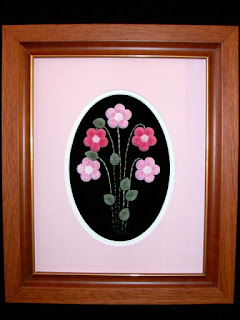 After 9 pm, I took Skytrain from Granville Station to Waterfront then transfered to Canada Line to Richmond. I’ve never seen that many people coming down and going up the escalators. It could be compared to Hong Kong MTR Causeway Bay Station!
Feb 20 (Sat)
9:20 am – going back to downtown, Canada’s Northern House opened at 10 am but I was already in the line. It was cold … I was waiting for my boyfriend. The lady in front of me was also waiting for her partner and he showed up with hot coffee for her … so sweet. If my boyfriend was late and didn’t buy me a hot beverage … let’s make a complaint. Yep … he showed up just on time … 9:30 am but no hot beverage. Should I give him a bad look? “That’s for you” … Wow he bought me a present! It’s even sweeter than hot beverage! It was the caribou hair tufting artwork we saw last night from VCC … $135 = lots of cups of hot coffee. 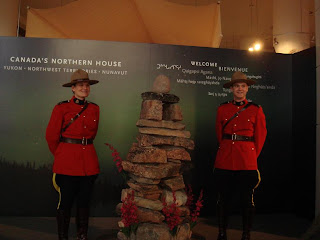 10:20 am – finally got into the Northern House. The exhibition place wasn’t big but very informative. The most exciting thing is we could enter into a contest to win $9000 gold nugget or $8000 diamond! Also we could create a 25 second video with arctic backgrounds which was very fun. I was standing in the middle of exhibition and I heard four Canadians singing “O Canada” on my right side for the arctic video and also the Natives singing on my left … like this … “The True North strong and free” … “ bom bom ba ba” … “God keep our land glorious and free” … “bom bom ba ba” … O Canada we stand on guard for thee … bom bom ba ba … my mind was in two pieces!!! 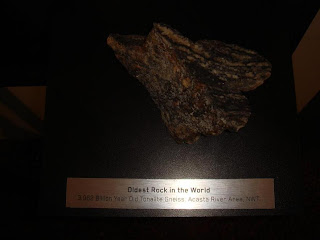 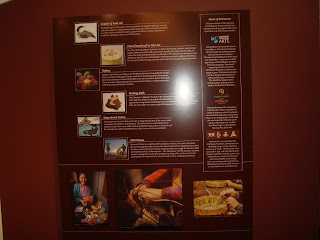 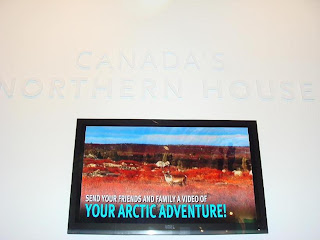 12:00 noon – we had lunch in Harbour Centre food court. Nothing special except everywhere there’s a lineup for lady’s restroom. How come there’s always a lineup for female but not male? Based on my unofficial research, on average each lady spends one minute in restroom while guy spends 30 seconds or less … that makes sense.
1:30 pm – heading to LiveCity Yaletown … again lots of people. Security check was very serious here, just like in the airport where we had to take out our cell phones and put them together with our jackets on the provided tray. We needed to pass through the security checking gate. LiveCity Yaletown is mainly about technology except Coca-Cola: Acer, Panasonic and Samsung. Oh man … lineup again for these sites … I was tired to do so already. 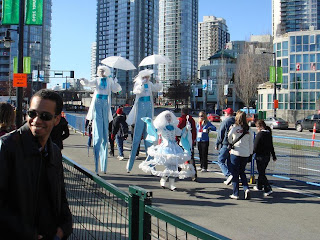 We saw these street performers while we were waiting in the line to LiveCity. Nice Entertainment! 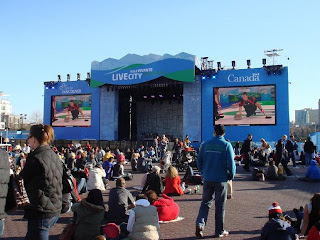 Finally there were two sites with no lineup … great! West House display – a very small two storey house (total 836 square feet) which is the smallest single house I’ve ever seen in Vancouver. The selling point is energy efficient design for environmental and sustainability purposes. Another site was to demonstrate how Vancouver can be a green city. 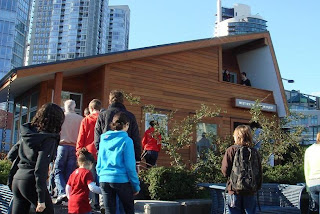 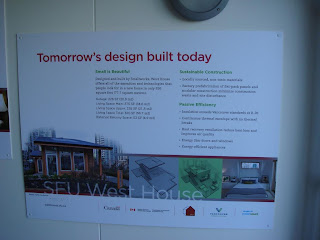 3:00 pm – left LiveCity and looking for washroom before going back to Richmond. Finally I found one in Yaletown Roundhouse Community Centre where Casa Italia is held. So lots of visitors. How come the ladies also lined up at the men’s restroom? Oh … because during Olympics it is used as women’s restroom … no wonder. I was a bit thirsty so I bought an apple carrot juice from JUGO for $4.15. After that I walked to Yaletown Canada Line station and there’s free hot chocolate from Salvation Army just at the entrance. Too late, I just bought a juice … I could have saved $4.15 if I found it earlier … Sigh
7:10 pm – walked to Richmond ozone from my house (about 10 minutes walk). The highlight for the day was ICE CARVING CHAMPIONSHIP! There were twelve masterpieces from different teams including Canada, USA, Japan, Italy and France. Each team was allowed 12 hours (7am – 7 pm) to carve the ice into beautiful sculpture. Cool! 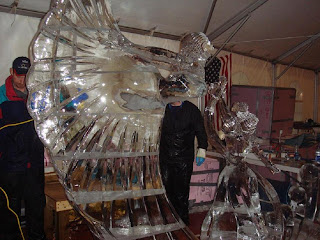 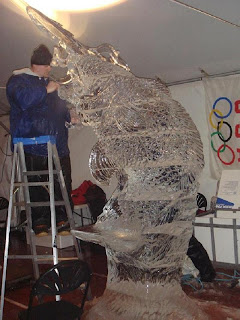 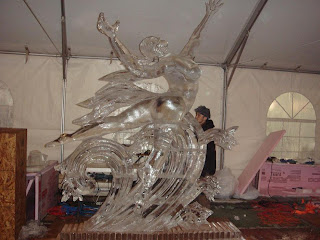 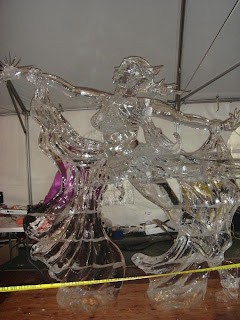 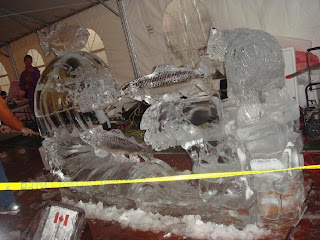