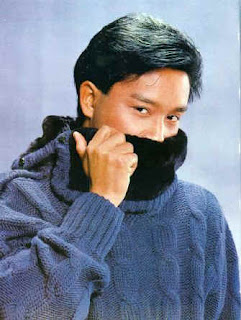 Today is April fool and also the 6th anniversary of Leslie Cheung’s death. Leslie (張國榮) was one of the most popular superstars in Hong Kong during mid to late 80’s. His popularity was just like Elvis Presley in the 60’s and Michael Jackson in the 80’s. His career was not limited to singing on stage but also acting in movies. I didn’t pay too much attention to Leslie during my childhood since I was a kid and his market was mainly for adults particularly young ladies. But I still remember seeing him on TV very often such as from EYT (歡樂今宵 – a family entertainment show running every weekday evenings), Jade Solid Gold (勁歌金曲 – a music show releasing once a week) & TVB Anniversary Gala (萬千星輝賀台慶), etc. The first song I heard from Leslie probably is 430穿梭機 (430 Shuttle – a kid program on TVB Jade starting at 4:30 pm Monday to Friday from 1982 til 1989). In December of 1989, Leslie declared his retirement from singing career and held the Final Encounter of the Legend Concert for 33 consecutive nights at Hong Kong Coliseum. I recall passing by the Coliseum one night during Christmas in 1989 and there were many people waiting to get in for Leslie’s final concert.

A few months after Leslie’s retirement, I had a chance to watch his first concert on a tape – Leslie Cheung Summer Concert 1985. After watching the concert, I got a clue why he was so successful and outstanding from the others – attractive appearance with melancholic eyes, charm and sweet smile, special and distinctive voice. Both his images and songs were combination of east and west.

Leslie sang so many hit songs during his lifetime such as 風繼續吹 (The Wind Blows On), 第一次( First Time), Monica, 少女心事(Young Girl’s Thought), 只怕不再遇上 (Afraid We Won’t Meet Again), Stand Up, 當年情 (Past Love), 無心睡眠(No Mood To Sleep), 沉默是金 (Silence is Golden), etc. But there are two songs I particularly like which were somehow as not popular as the others - 片段 (Piece of Memory) & 可人兒 (My Sweet Girl). 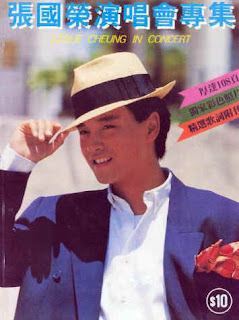 Does anyone know where to buy Leslie’s Summer Concert 1985 since I want to watch it again?