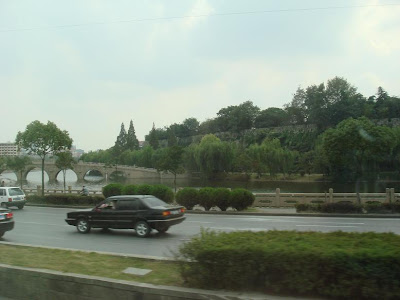 On the fifth day we visited Nanjing 南京, the capital of Jiangsu province. Nanjing had experienced the darkest history in WWII when brutal massacre was conducted by Japanese Army there. Our tour guide mentioned about Nanjing Massacre Memorial Hall 侵華日軍南京大屠殺遇難同胞紀念館 which was not included in our trip so that we would not lose appetite to the “great” cuisines!

Because Nanjing has served as the capital of China several times in the history, it is considered one of the Four Great Ancient Capitals in China 中國四大古都之一. 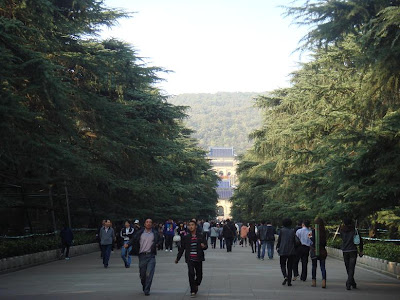 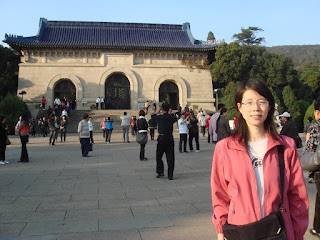 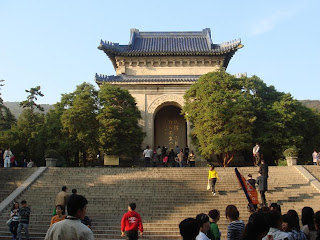 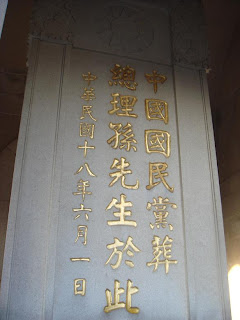 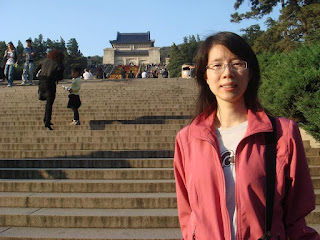 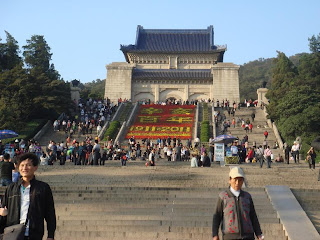 Let’s start going to the tomb! There are 392 steps which seems time and energy consuming to climb. In fact, the flat steps make visitors comfortable to walk and I only spent 15 minutes to reach the top! Some women even wore high heel shoes to go up. The slope grassland in front of the tomb was decorated with “辛亥百年 1911-2011” since it was 100th anniversary of 1911 Chinese revolution which was started on October 10, 1911 led by Sun Yat-Sen to overthrow Chinese imperial system which had existed for over 2000 years. 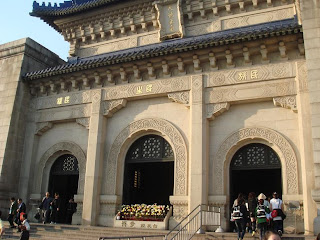 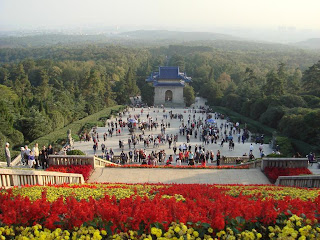 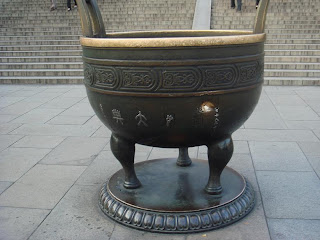 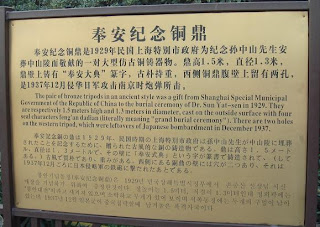 Once I reached the top, I went straight and entered into the mausoleum. Since I didn’t take photos inside, I only recall seeing a huge statue of Dr. Sun Yat-Sen. There should be a flag of Chinese Nationalist Party on the ceiling which I didn’t pay attention. When I got out from the mausoleum, I was totally attracted by the view … it was very spectacular with the area surrounded by forests! Did you notice from the picture that you cannot see any of the steps from the top? Wow … what an amazing design!


On the way back to the bottom, I saw a hole on the traditional Chinese bronze tripod which was caused by Japanese bombardment in December 1937.


There is another historical site at Purple Mountain which we didn’t have a chance to visit – Ming Xiaoling Mausoleum 明孝陵. It is the tomb of Zhu Yuanzhang, the first emperor of Ming Dynasty, with the Queen Ma. The construction of this mausoleum was completed in 1405, existed for over 600 years! Ming Xiaoling is one of the biggest imperial tombs in China and the location was carefully chosen according to Fengshui 風水 principles. The design and scale of Ming Xiaoling Mausoleum had a great impact on subsequent Ming and Qing imperial tombs in Beijing, Hubei and Hebei. 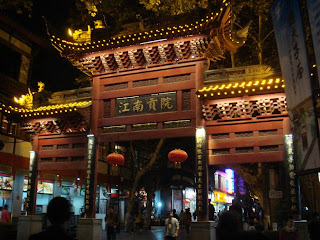 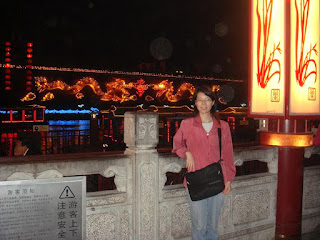 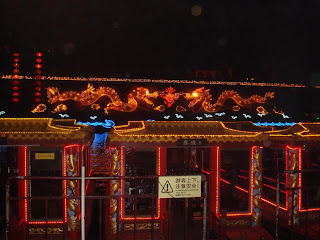 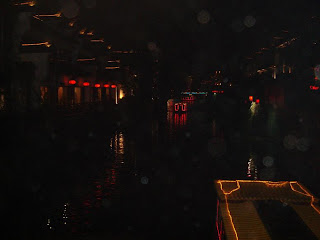 Nanjing has been the center of education for more than 1700 years, the largest imperial examination site in ancient China “Jiangnan Gongyuan” 江南貢院 was located along Qinhuai River in Nanjing. This institute was founded in 1168 during Song Dynasty (960 - 1279) to host imperial examinations at the county level. The academy became the site of examinations given by the central government throughout Ming (1368 - 1644) and Qing (1644 - 1911). There is a Confucius Temple 南京夫子廟 in the neighbourhood where the scholars used to pray for success and worship Confucius. The temple has been destroyed and reconstructed several times. In 1984, it was rebuilt in Ming and Qing style.


Nowadays, this area is a popular tourist place with many stores and restaurants. Instead of shopping, I would rather look at Qin Huai River 秦淮河, Nanjing’s mother river. As a branch of Yangtze River, it is the largest river in Nanjing and also the birthplace of the old Nanjing culture. 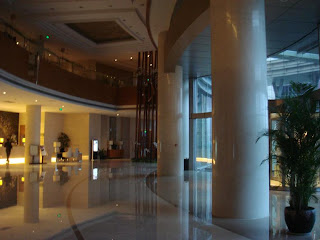 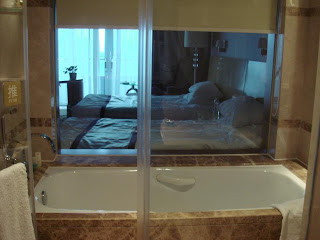 
Next morning during breakfast, we chatted with other people from our tour. One couple from Vancouver told us they had bad experience in an inn when they travelled to England. The worker went into their bedroom without their consent. Then an old man from our group said he also experienced something strange in Glarun Jinling Hotel. He told us that the bathroom was transparent. No wonder, I think he didn’t realize that he could put down the blind for the bathroom! He also told us that his friends in Hong Kong would not greet him by saying “Hi” or “How are you?”, they liked to greet him by saying “You’re still alive!” 乜你仲未死呀! 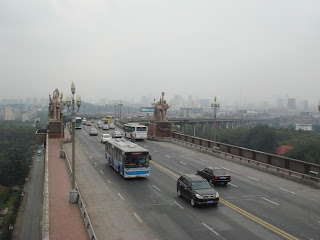 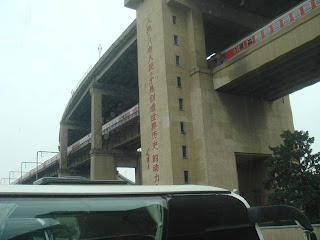 After breakfast, we visited Nanjing Yangtze River Bridge 南京長江大橋 (constructed in 1960-1968). It is the first double-decker, double-track highway and railway bridge designed and constructed by Chinese without any foreign support due to the withdrawal of Soviet experts following the Sino-Soviet Split. It's been considered a great construction since Chinese experts had to overcome many difficulties and obstacles to complete the bridge. If I’m not mistaken, the local guide said many Chinese donated their woks (kitchen utensils) for the construction of this bridge. The upper deck of the bridge is a highway with a span of 4,589 meters. There are sidewalks on either side of the highway. The lower deck holds a twin-track railway with a length of 6,772 meters and a width of 14 meters that allows two trains to run in different directions.

In this trip, I found out that Nanjing is a vibrant city with enriched culture. It will also host the 2014 Summer Youth Olympics.
Posted by Andrea at 10:30 PM