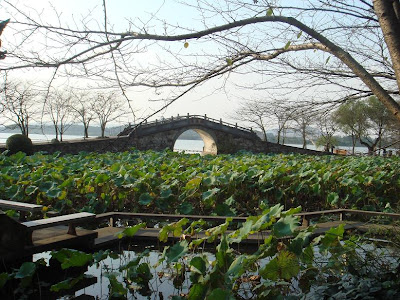 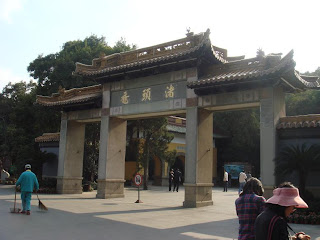 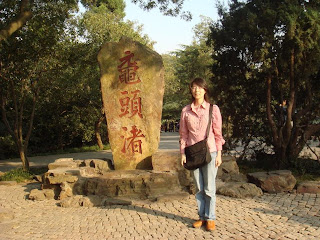 Here’s the entrance of 黿頭渚, the best place to view Tai Lake. How to read 黿頭渚 in Chinese? If you pronounce it as gwai tau zyu in Cantonese or gui tou zhu in Mandarin, which sounds like turtle head piglet 龜頭豬 … it’s WRONG! The correct pronunciation should be yuen tau zyu in Cantonese or yuan tau zhu in Mandarin which means turtle head islet. 黿 means an Asian giant turtle. The park was given this name because its islet surrounded by water on three sides looks like the head of a large turtle. 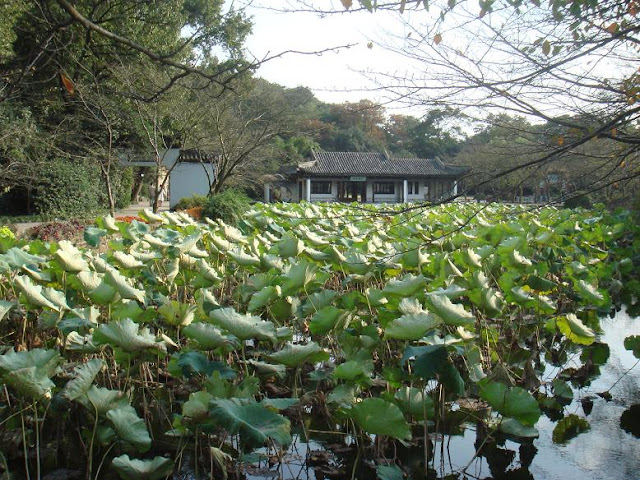 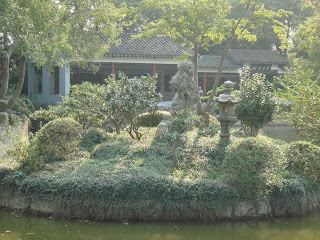 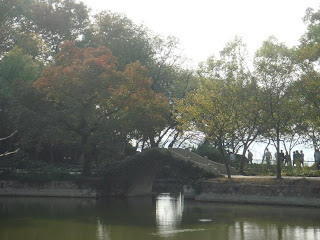 The branches of trees were empty in October, they are cherry trees given by Japan and the blooming season is in spring. The best time to view cherry blossoms here is from end of March to mid April. There was no lotus flower in the lotus pond as the blooming season is in summer. Still I could see the beautiful layout of this park with the pavilions, bridges and ponds. 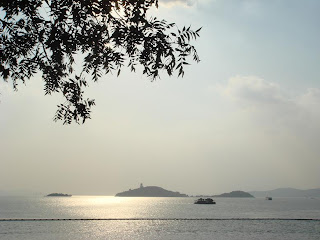 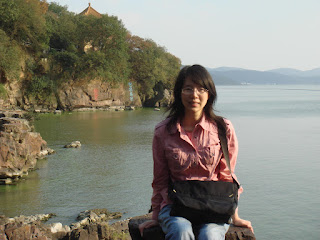 Tai Lake 太湖, the third largest freshwater lake in China, provides abundant source of fish, shrimps, crabs and pearls. Tai Lake, now the border of Jiangsu and Zhejiang provinces, was the border of Wu and Yue kingdoms more than 2000 years ago.

Next morning while we were still in Wuxi, we were driven to pearl jewellery store which the pearls were all from Tai Lake. Then we were taken to the purple sand teapot museum 紫砂博物館. You may think the teapots are in purple colour, actually it can also be in black, brown, red, yellow, and green. There are different types of purple sand clay with varying colours and the different coloured clay can be further mixed to create new colours. Interesting! For those who want to enjoy the highest level of Chinese tea culture, they may need a purple sand teapot which can preserve and enhance the taste, favour , aroma and colour of tea because of its special texture (the porous nature of purple sand clay allows the teapot to absorb the essence of tea). But the teapots are expensive though … the more delicate and unique its design, the more expensive it is!


It was halfway through our trip already and everyone was quite satisfied except the meals. The title of this tour was called “九天七晚上海江南豪華美食遊”–9 Days 7 Nights Shanghai Jiangnan Deluxe Tour with Great Cuisine, so everybody was expecting delicious meals! Food was okay, although not very tasty or nicely presented. Each day we had breakfast buffet in the morning, lunch and dinner at restaurants where each table of eight was served with a huge bowl of rice, ten dishes including meat, poultry, seafood (mainly fish, sometimes shrimps also), veggies (sometimes we had Chinese carrots), egg and tomato (everyday’s standard dish which many people were getting sick of it), a big bowl of daily soup, watermelon as standard fruit, a pot of hot tea, 2 bottles of local beer and 1 big bottle of Sprite. The portions were quite big so there was always leftover. Imagine 10 dishes + 1 soup + 3 drinks + fruit for 8 … wasn’t it great in terms of quantity? We only paid CAD 49.00 for 7 days local transportation, meals and accommodations, which means 7 bucks a day. If I only had $7 for a day’s meal in Canada, I think I would buy hotdog with pop at Costco for breakfast ($1.50) + hotdog with pop at Costco for lunch ($1.50) + soup combo with coffee and donut at Tim Hortons for dinner ($3.75) … haha!

One evening the title of our dinner was called “乾隆宴”Qianlong Emperor Banquet. Wow … this sounds amazing! Then the tour guide explained the supper did not contain the finest dishes of ancient palace, we would enjoy the ordinary dishes which the emperor had during his visits to Jiangnan.
Posted by Andrea at 9:32 PM