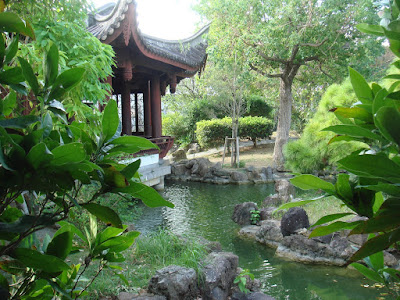 Happy Holidays Everyone! Now I continue to write my blog for the trip in 2015 ... haha. Does the above picture look like a traditional Chinese garden? It is a Chinese garden in Naha, Okinawa called Fukushuen 福州園 (https://www.naha-navi.or.jp/fukusyu-en/).

According to Wikipedia, Fukushuen was constructed in 1992, in celebration of the 10th anniversary of the establishment of the sister city relationship between Naha and Fuzhou in China. 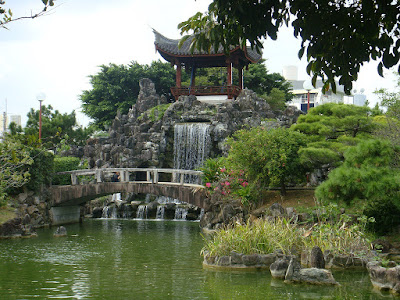 Fukushuen was one of the must see attractions that we visited in the morning. It took us 10 minutes to walk from our apartment to the garden, which was a healthy exercise 😄

The scene I like most there was its pavilion with the waterfall and a bridge in front. 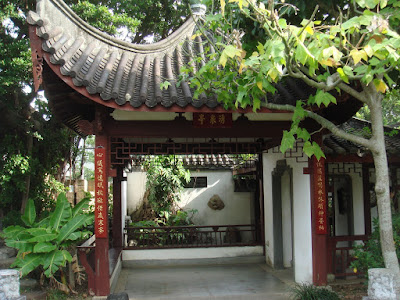 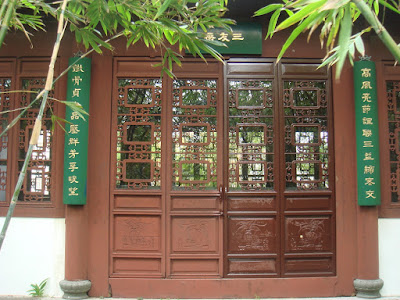 As Fukushuen is a representative of traditional Chinese garden, there are many Chinese couplets found at different entrances. Examples: 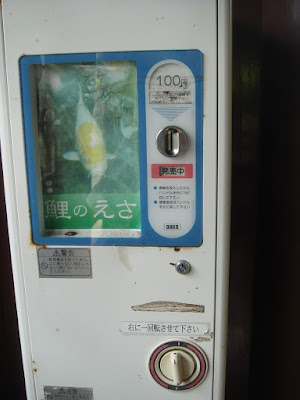 Any idea about the picture above? 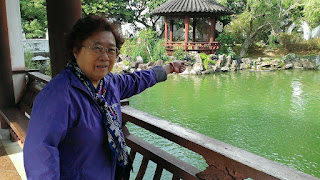 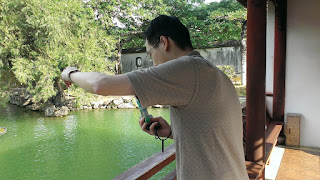 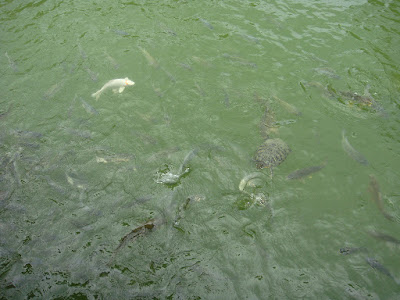 Let my auntie and brother demonstrate it ... put 100 yen (around $1.50 CAD) into the machine to buy a box of fish food. Then drop the food into the lake. See ... many koi and even turtle come up for the food! 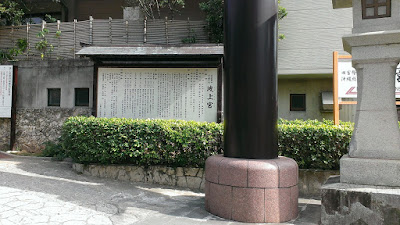 After visiting Fukushuen, we headed towards Naminoue Shrine (波上宮) since it's within walking distance. Probably another 10 minutes to get there. What's special about this shrine? I think it's the location as people can overlook Naminoue Beach and the ocean at a particular spot in the shrine.

According to Wikipedia, it is originally a sacred space of the native Ryukyuan religion, due to its location and natural beauty. At some point it came to be known as Nanminsan: Nanmin is the Okinawan reading of 波上, meaning "above the waves", which is pronounced as Naminoue in Japanese.

I recall there were much more visitors in Naminoue Shrine than Fukushuen. There was a Chinese tourist group with a tour guide explaining the shrine so I merged into the group and paid attention to what he said ... hehe! 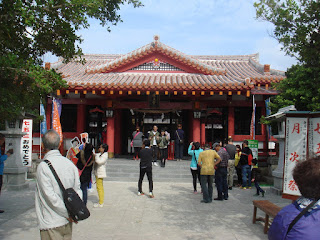 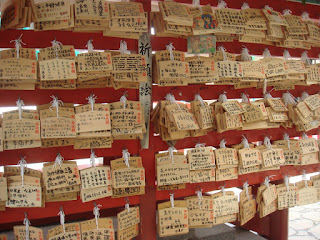 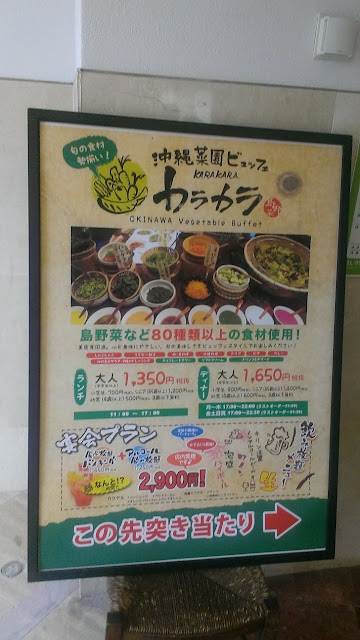 Next we went to Karakara Buffet for lunch (http://karakara-okinawa.com/). I found this restaurant on a website and like it very much since it is similar to 草楽 buffet I had when I travelled to Nagoya in 2012. Both restaurants have lots of wood design creating a cozy and natural environment. They offered local ingredients and seasonal vegetables. Every time when I had buffet in this type of restaurant,  I felt I was in a countryside garden (很有田園氣色).

However Karakara Buffet was not easy to find. We were almost there but had no clue about the exact location. None of us can speak Japanese so we just picked a young guy to ask for the direction. With simple English, we hoped he could understand what we asked. It turned out he's so excited to be able to practice his English with us. Although his English was a bit limited, he was able to use the term "elevator" because the restaurant was just located on the 9th floor in the building behind us...haha! 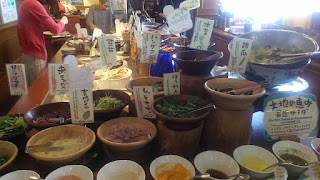 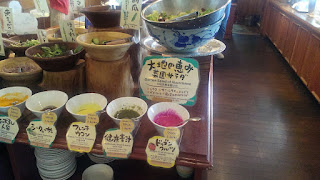 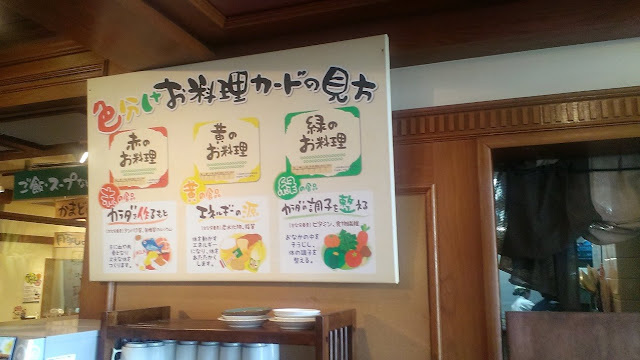 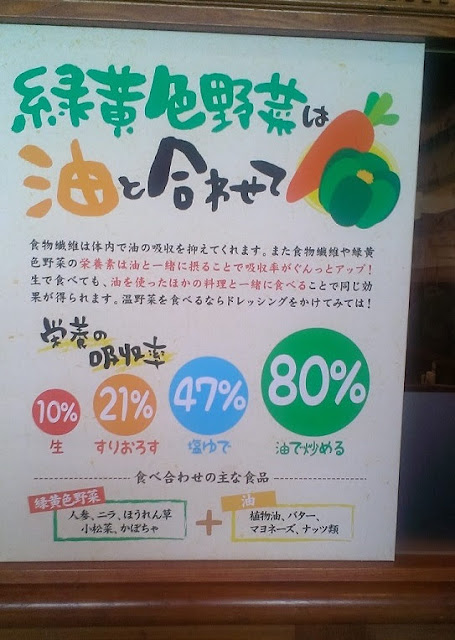 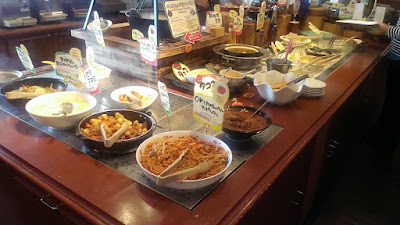 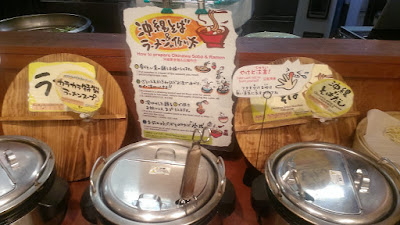 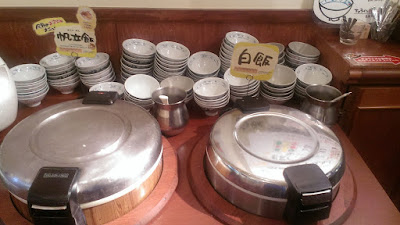 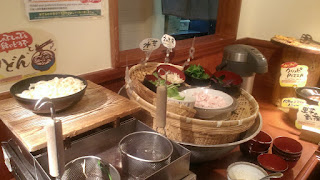 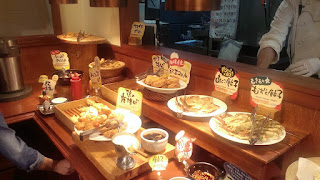 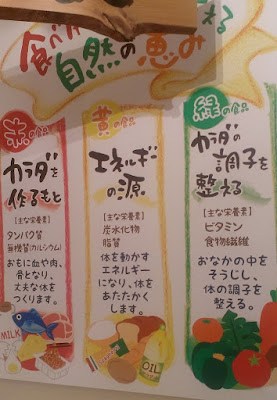 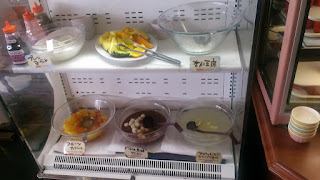 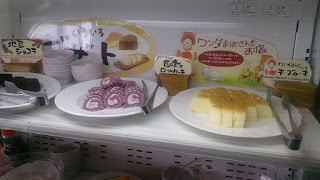 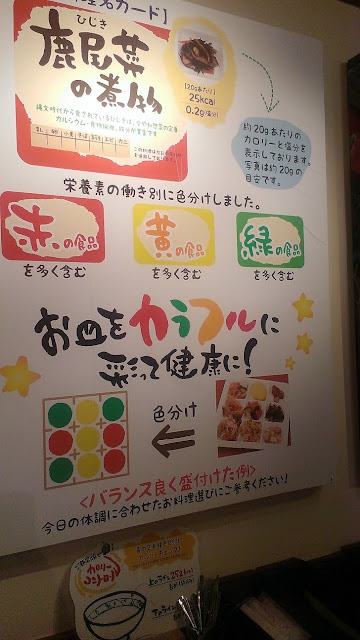 As you can see from the pictures, the restaurant provided variety of vegetables and sauces, noodles and two types of rice. The desserts were light and tasty! The most popular dessert was almond tofu pudding which was gone very fast. Once we saw the staff bringing a bowl full of almond tofu pudding, we grabbed it right away 😆

There were several signs in the restaurant to indicate the food category by three colours - green, yellow and red. Green means fibre, yellow means carbohydrates and red means protein. Then it showed us how to place our food on their plates. 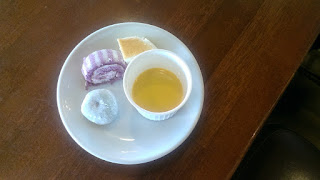 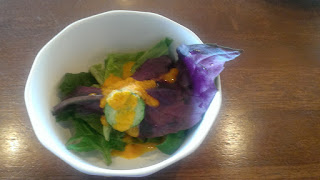 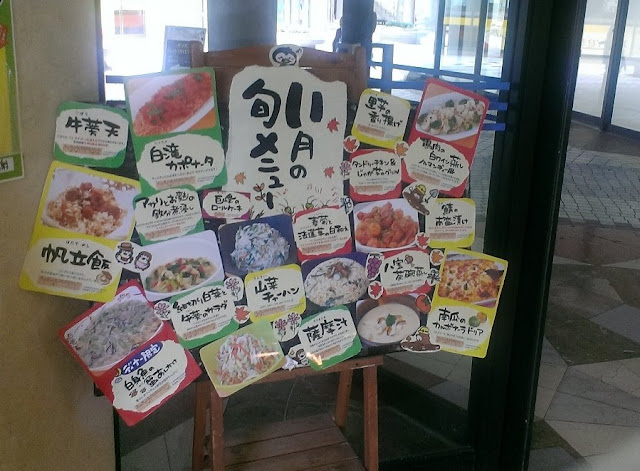 I wanted to be creative so I didn't follow their way. I put whatever I like on the plate. One thing I like their plate design is I could try nine different food but each one was just a small portion (like a sample tasting) so I would not eat too much and gain weight.

Just right outside the restaurant, they put pictures for the dishes available in November (the current month). I think it's a very good idea! 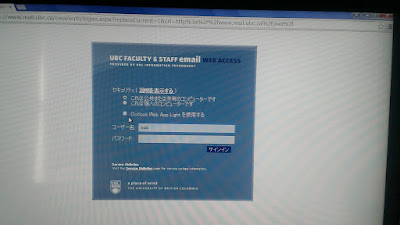 After we returned to our apartment, I was trying to check my office email on its computer. But the login screen was in Japanese! Wow! Better not to touch it so I didn't check my email there.