The second part of my Hong Kong vacation was from November 28 to December 10, 2015. We were in Hong Kong from November 15 -21 then travelled to Okinawa on November 22-27. There are too many photos to share so I will write about Snoopy World, Cheung Chau Island and Ocean Park separately. I will also share my pleasant experience in Okinawa on my blog shortly. Stay tune for it! 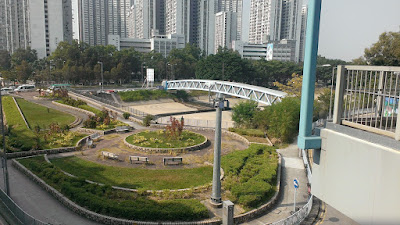 We stayed in Yuen Long for about 10 days so there should be more to write about. The above picture was taken nearby Long Ping Station 朗屏站 while we were walking to bus terminal for 268C to Kowloon Bay 九龍灣. I used to think Hong Kong is lack of green spaces since it has excessive high rise buildings. I have changed my thought from this visit when I saw many green trees or plants along highways and in some residential areas.
It is unbelievable that now it only takes 50 minutes to travel from Yuen Long to Kowloon (36 km distance based on Google Map). It took me 30 minutes to drive from home to work in Vancouver for travel distance of 18 km without traffic! During my childhood, this Yuen Long - Kowloon Bay route took almost 2 hours. Without highway and tunnel, we used to take bus 68M from Yuen Long to Tsuen Wan Station 荃灣站 then transferred to MTR (mass transit railway) to Prince Edward Station 太子站 then transferred to another MTR to Kowloon Bay Station.

Someone must be a big fan of Hong Kong bus, videotaped the whole trip of 268C ... cool! Good video for those who have never been to Hong Kong but would like to know how its typical roads and traffic are like. 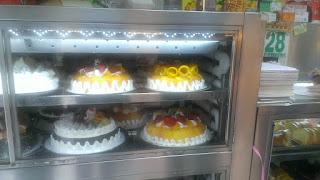 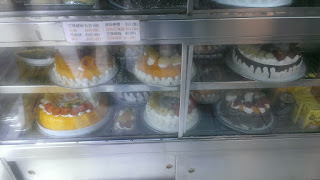 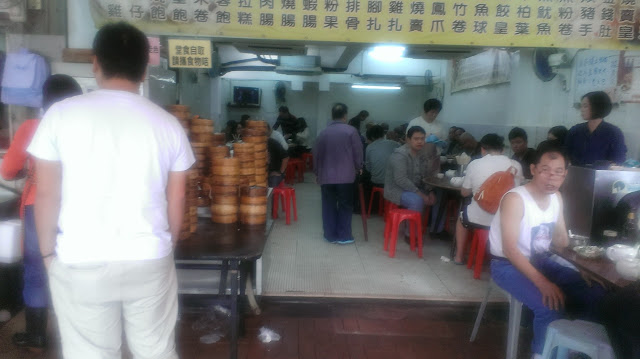 More pictures from Yuen Long, I think this small local cake shop or dim sum restaurant  街坊麵包店/街坊茶樓 represents  the life of middle or low income class in Hong Kong.  Although they are not franchised,  they got tons of customers!

We couldn't resist the yummy mango cakes so we bought some.  It even had 20% off for seniors! Unlike Vancouver, the price of cake was not calculated by inches but by weight such as 1 lb or 2 lbs ...
Am I professional in blurred photography 沙龍照片? Nope, it just happened that I got to take these pictures in a quick motion to avoid being scolded by the store owners or customers ... hehe. 估唔到變咗咁靚沙龍相 J
 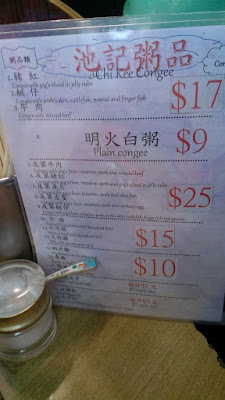 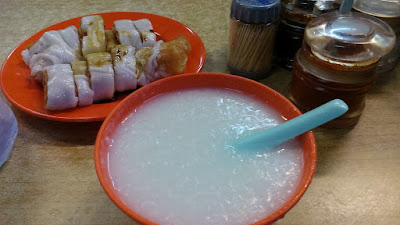 Remember the yummiest breakfast we always had in Yuen Long. Bored to take out all the time L so we spent one morning to eat there. No deep fried dough or put chai ko, instead we had deep fried dough wrapped in rice roll 炸兩 and plain congee J 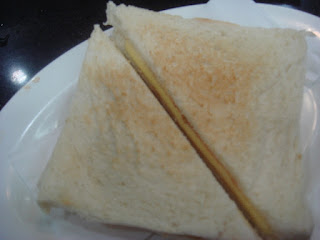 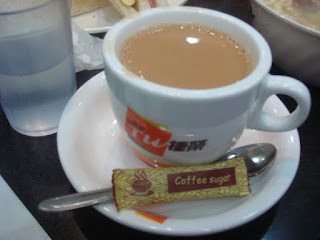 Without having Hong Kong style lunch was not a complete visit in Hong Kong (一定要試嘅港式茶餐廳). There were many unique things about Hong Kong style meals 港式茶餐 such as fresh butter toast 鮮油多 (I just translated it directly word to word, the more appropriate term is thick butter toast since there was a thick piece of butter in the centre). I know this was unhealthy but once in a while should be OK, right? They even had coffee sugar for Hong Kong style coffee 港式咖啡, what a perfect match! 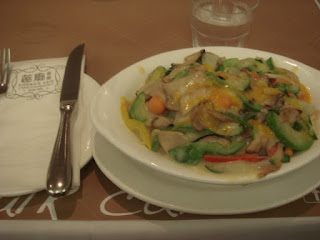 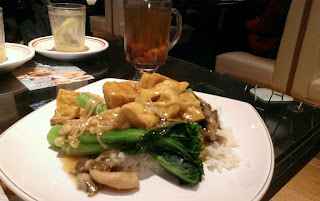 There were days that I need to be vegetarian so the choices on the menu became very limited to me. But still the meals without meat were delicious and quite filling (素食都好豐富). Most important is not to have gout 痛風 as people with gout cannot eat good vegetarian food like tofu and mushrooms (有痛風想食齋都唔掂). 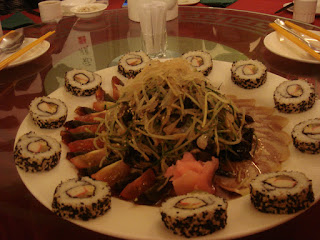 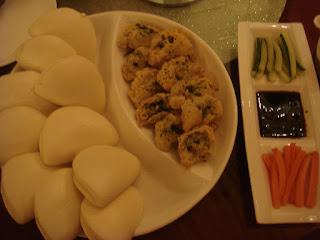 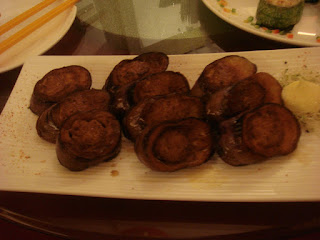 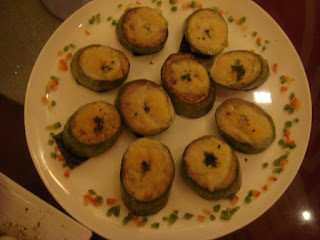 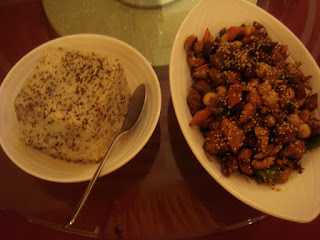 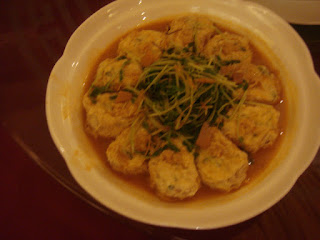 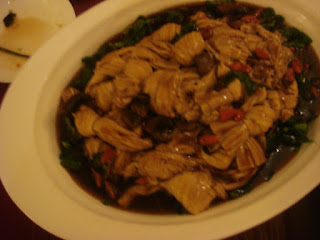 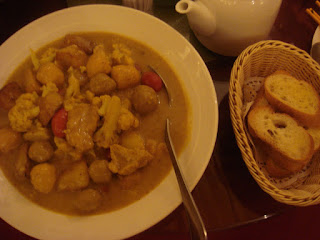 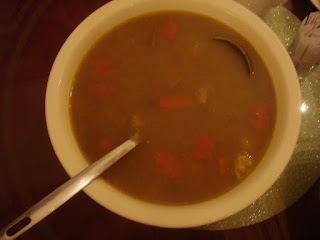 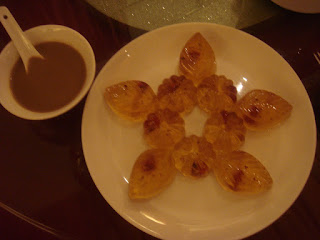 Do you think the dishes, soup and dessert look mouth watering??? Wa! 睇見都流口水? These were all vegetarian food from a Veggie Palace in Wan Chai (灣仔一間叫貴德宮嘅私房素菜, it was my first time having 私房菜 ... with全齋宴).

Very special hey! I recall we were served with unusual tea like lavender.

From left to right, top to bottom. 1st photo is salad platter with sushi, 2nd photo is ... I forgot ... hehe, like we got to put the deep fried food with carrot, cucumber and sauce into the bun. 3rd photo is eggplant! 4th one should be pan fried cucumber with seaweed at the bottom. 5th one ... 6th one ... 7th one ... too many, let's skip to 8th photo since it looks more interesting. It was a curry dish which we could dip the toasted bread to the curry sauce ... hehe. 9th is soup of pumpkin and sweet corn. 10th photo shows walnut paste and osmanthus jelly. 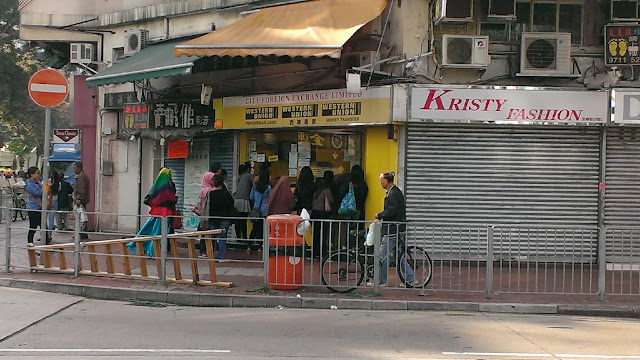 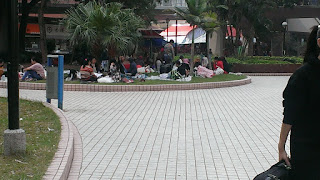 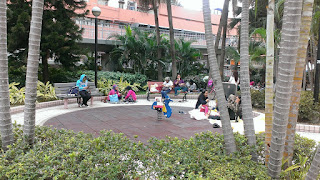 The atmosphere in Yuen Long was different on Sunday. See how many customers Western Union had. Why???

These were Indonesian maids 印傭sending $$$ back to their families, I think. Sundays are their holidays also picnic days. There were so many having picnic on the street or in the park. I kind of understand, they are also humans who need buddies to communicate but I hope they would not leave garbage everywhere after picnic. I was told by the street cleaners that they left lots of garbage after picnic back in year 2012. 同好姊姐傾心事唔緊要, 最緊要保持香港清潔.

This song was for Hong Kong civilians, after 20+ years I think same song can be advertised to certain foreign labours and for certain tourists. 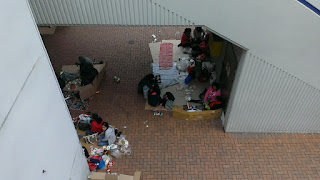 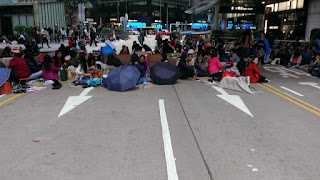 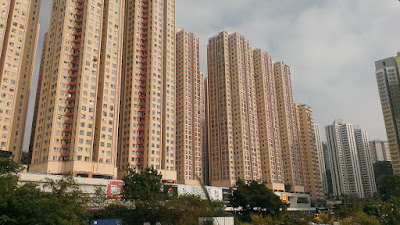 When we went to Kowloon Bay, we had a quick visit to Amoy Garden s 淘大花園. Amoy Gardens became famous worldwide in 2003 due to the outbreak of SARS. I took picture of it not because it is well-known, but I spent 6 years dwelling there before I came to Canada. Every time when I visit Amoy Gardens 淘大花園, memories come to my mind ... http://chan38.blogspot.ca/2009/03/memory-of-lower-ngau-tau-kok-estate.html.
怪唔得小學時有位老師成曰講"想當年"又"想當年"又"想當年". 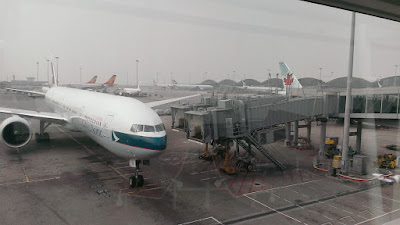 December 10 was time to go back to Vancouver, flew with Cathay Pacific. Can you see the Canadian Flag? Air Canada was at the next gate and its flight took off 7 minutes ahead of ours. I believe it was exactly 7 minutes since I counted it ... hehe. Air Canada we were following you J