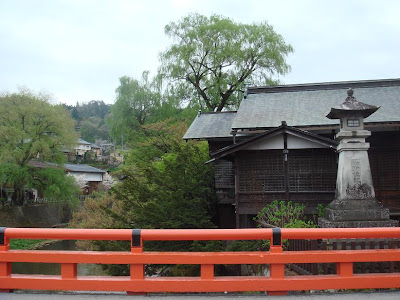 Takayama 高山市 is an ancient city in the northern region of Hida. Beautifully situated within the mountains, this city took shape in the 16th century when Takayama Castle was built. Due to its high altitude, Takayama is fairly isolated which makes it unaffected by the modernisation of Japan.

Takayama , also known as little Kyoto 小京都, for its temples, shrines, historical buildings and streets that are similar to Kyoto on a smaller scale. Takayama’s carpenters are said to have built the Imperial Palace and temples in Kyoto.

Upon arrival in Takayama, it was almost 5:00 pm. We walked around the town to look for a travel adaptor without luck. Already forgot how many streets or blocks I’ve walked through, but I recall it was a tranquil city in the evening with very few people on the street. 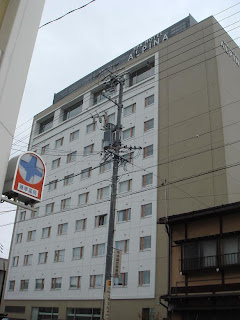 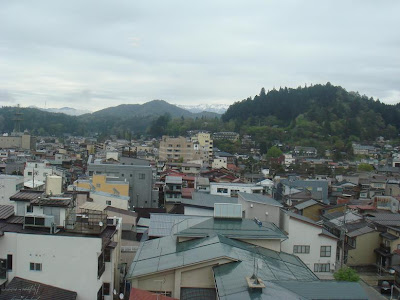 This is the hotel I stayed in Takayama, where hot spring bath on the top floor was available for ¥ 150 (very good price! condition: must be the hotel guest).

I enjoyed its hot spring in the early morning. It was my first time to try hot spring 浸溫泉 and the experience was quite good. I went to the outdoor hot spring bath where I could view the entire city with a snow mountain behind (I think it’s Hida Mountains 飛驒山脈 which is also called Northern Alps 阿爾卑斯山脈). Looking up to the sky, I could see and feel the hot steam while breathing the fresh air, what an interesting combination! 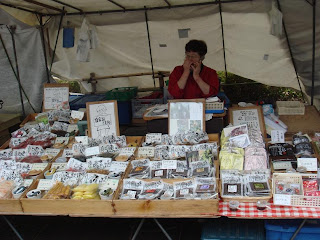 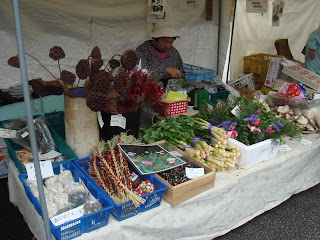 I felt energetic after bath, let’s visit the morning markets. There are two morning markets in Takayama – Jinya mae 陣屋前朝市 and Miyagawa 宮川朝市. Above are the photos of Jinya mae morning market where homemade sweets, homemade pickles, dried foods and fresh vegetables were found. The market was small with about 15 stalls mostly run by senior women or housewives.

Still remember the women from the fist stall that I visited kept telling us about her products (唔知乜乜餅) and pointing to the price. ローメ#%丫??? Her body language told me that she suggested us to buy three for ¥ 1000 instead of one for ¥ 350. 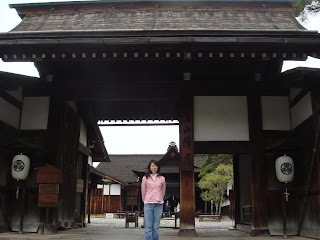 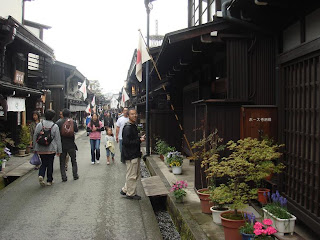 We walked through the Nakabashi Bridge to Old Private Houses 古い町並 where the traditional shops lined up along the old street. Seeing the old-style architecture in this historical district was like taking us back to the scenery of Edo period merchant street. Big contrast from last evening, street was full of tourists. I especially like the ditch with very clear water in front of the shops. The flower pots right outside the stores were lovely too! 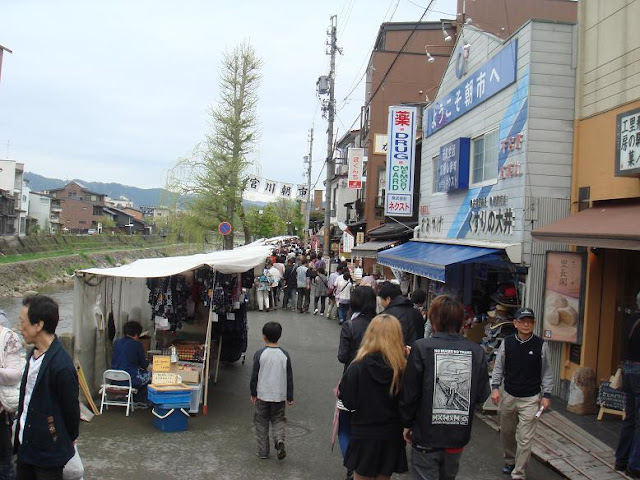 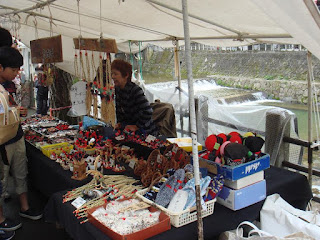 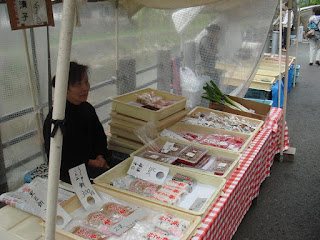 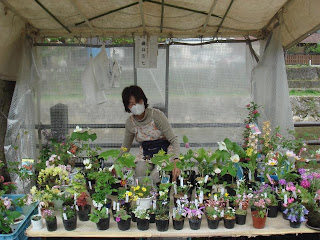 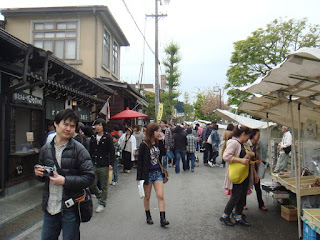 Not far away from Old Private Houses was Miyagawa morning market 宮川朝市. As the market name, it is located by Miyagawa River in the centre of the town. From my estimation, there were around 30 stalls on river side and 25 stores or restaurants across the stalls on the other side.

Again the street was full of tourists. It was bigger than Jinya mae morning market, the stalls were selling homemade sweets, homemade pickles, fresh vegetables, produce, plant and flower pots, chopsticks, local woodcrafts and surobobo, etc. The stores were mainly selling souvenirs such as gift box of sweets, postcards, handkerchiefs, nuts in different favours and sakes. For the food products and alcoholic beverages in the stores, they often provided samples to taste. 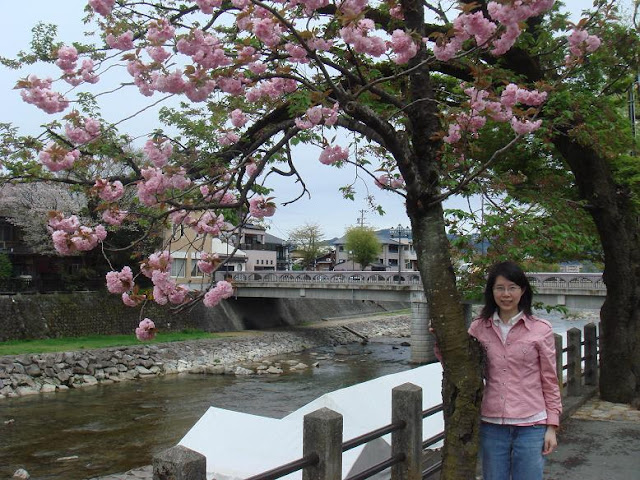 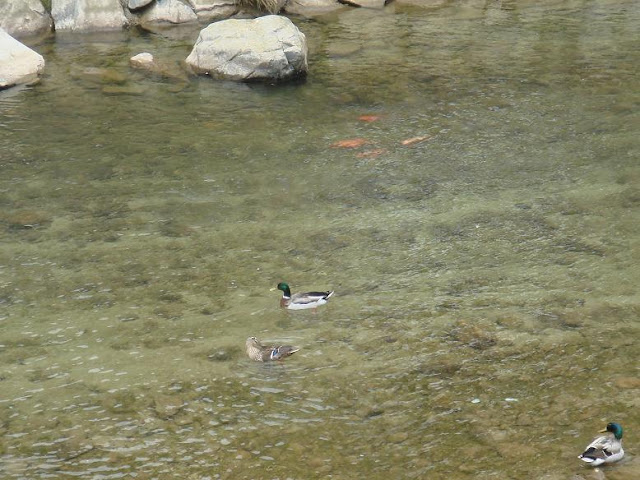 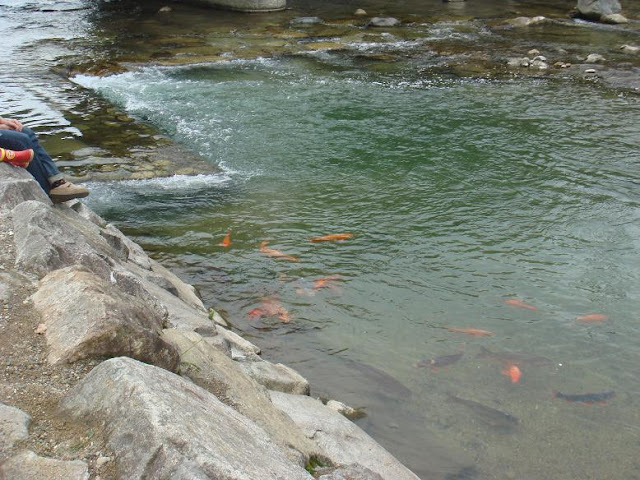 I found a cherry tree in blossom by the Miyagawa River. See how clear the water was … ducks and fishes enjoyed swimming in the river! 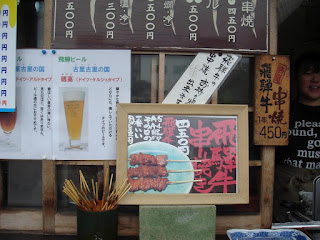 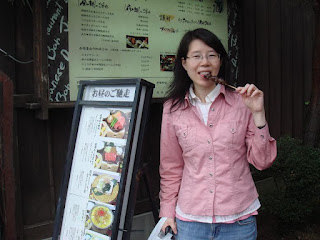 Finally I could try the real Hida Beef in Miyagawa morning market. One skewer for ¥ 450. 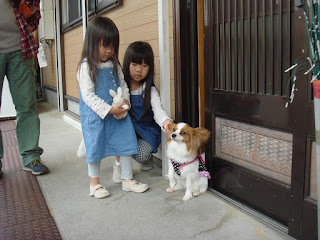 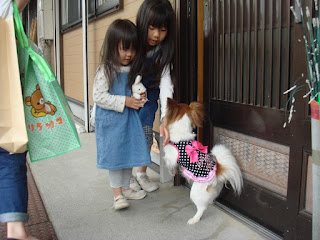 A nicely dressed doggie in front of her house in the morning market, she was greeting the little tourists when they approached her. 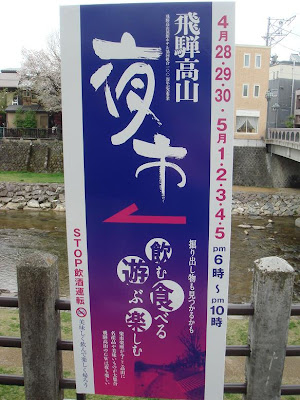 Night market was held in Hida Takayama  飛驒高山 between April 28 and May 5 from 6 to 10 pm. This was short compared to the night market in my home city, Richmond, which lasts from June to September and 7 pm to 12 am every weekend. I wonder what would be the difference between morning and night market there? 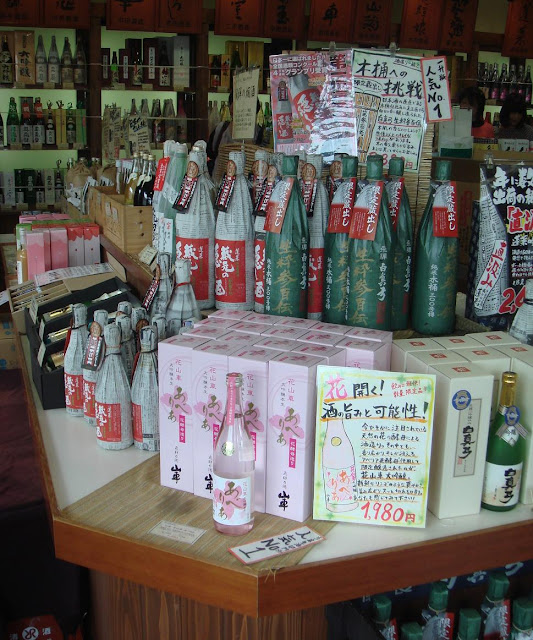 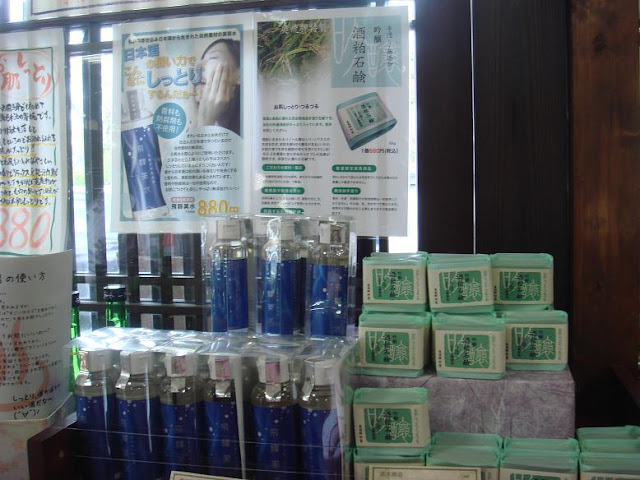 Sake is the fermented rice wine in Japan. In Takayama, local sake has been brewed since the Edo period (about 300 years ago). The good quality pure water from the mountains, Hida grown rice and its unique environment with ideal climate give Takayama a perfect condition for brewing sake.

Besides selling sake, this store had skincare products made from sake too! 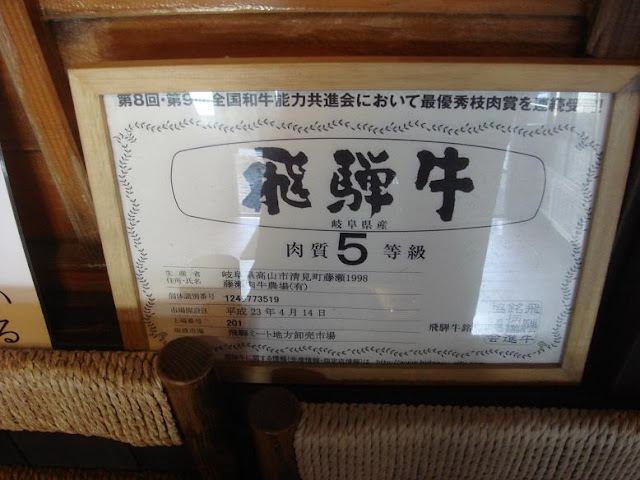 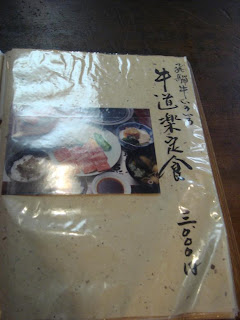 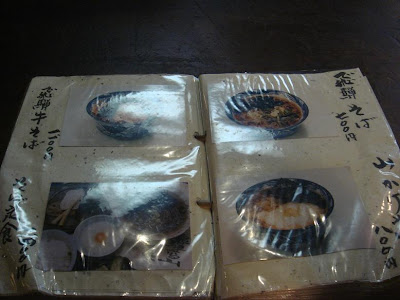 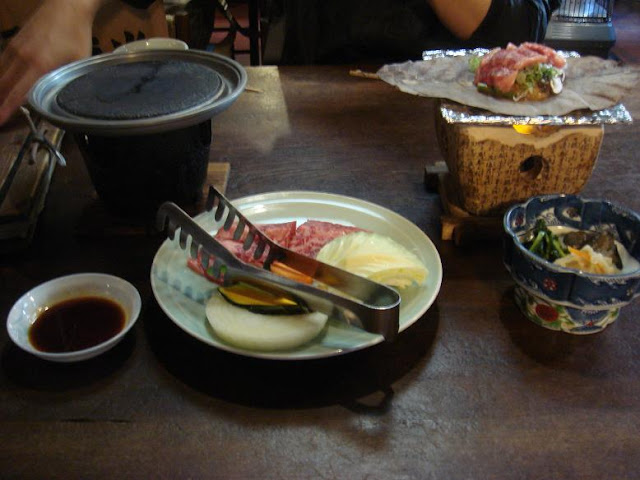 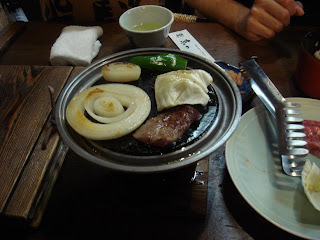 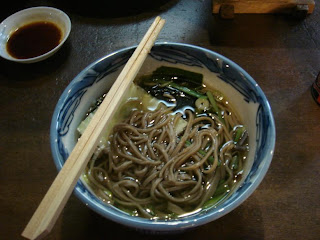 At lunch, we picked a restaurant serving Hida Beef. Unlike the one in Shirakwa Village, I felt this restaurant was more trustworthy as I saw its certificate of Hida Beef. Let’s go for Hida beef BBQ meal for ¥ 3000 (CAD 37.50) and the local soba noodle for ¥ 700 (CAD 8.75). The BBQ set menu included few pieces of Hida beef, lettuce, onion, green pepper and pumpkin, a bowl of pickles with tofu, and hoba miso (food grilled with fermented soybean paste on a magnolia leaf). It was a delicious meal except the hoba miso tasted a bit strong. 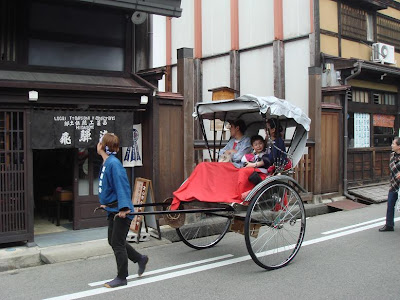 I saw three or four rickshaws on the historical streets which my friend liked to name them “old taxi”. 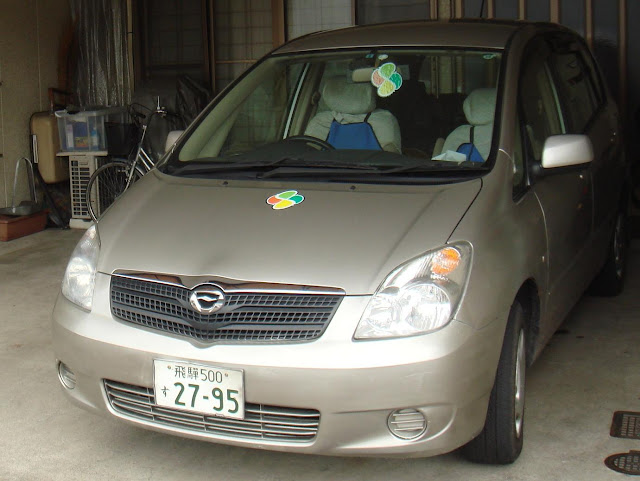 Do you have any idea about the colourful labels on the front windshield and the front cover of this car? Any guess? For new driver?

I could only find the official kanji  “飛驒” from Hida license plates. Since 驒 in Japanese kanji is always written as 騨. In Japan, I saw domestic brand vehicles and European cars such as Audi and Mercedes-Benz but no American and Korean cars at all.

Originally we planned to spend more time at Old Private Houses 古い町並 after lunch to discover more charm about this historical district. Regrettably we had to skip this part or we would have missed the train to Hida Furukawa Station 飛驒古川.
Posted by Andrea at 9:37 PM